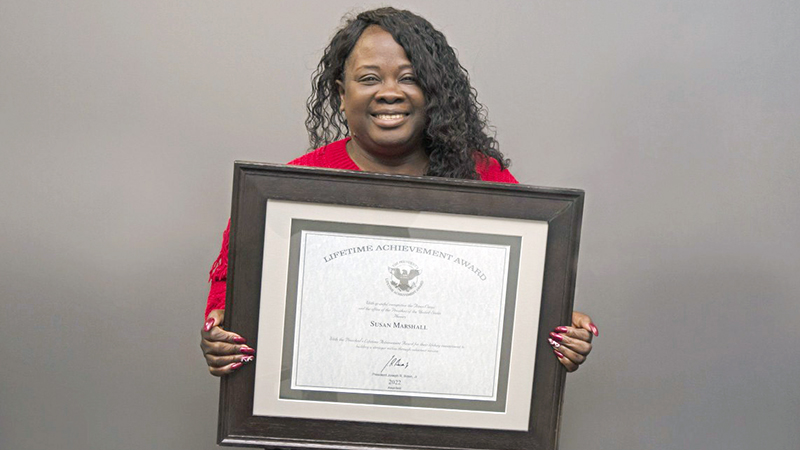 Susan Marshall, a human resources specialist with the U.S. Army Prime Power School here, was presented with the President’s Lifetime Achievement Award, signed by President Joe Biden, in recognition of more than 10,000 hours of volunteer work she has performed throughout the local community. (PHOTO BY BRIAN HILL/FT. LEONARD WOOD PUBLIC AFFAIRS OFFICE)

In addition to the human resources role she has performed for the U.S. Army Prime Power School here over the years, Susan Marshall has been doing quite a lot in the background for the local community. From helping out at area nursing homes, to housing the homeless and feeding hungry children throughout Pulaski County, Marshall has given more than 10,000 hours of her time to helping people in need.

Her efforts were recognized this month, when she was presented with the President’s Lifetime Achievement Award, signed by President Joe Biden.

“I’m honored,” Marshall said of the award. “Not that I do it for the accolades; I do it because I care about people, but I’m honored that someone sees my heart.”

Marshall, originally from Opp, Alabama, said her desire to help people comes from the community where she was raised — she was one of 16 children growing up, and her father passed away when she was just six years old.

“I don’t remember ever going without anything because the community came together and they made sure,” she said. “I just made up my mind that I’m going to give back because I know that people made it possible for me, so I just get joy in helping people.”

The Army brought Marshall to Fort Leonard Wood — she retired here in 2008, after completing 22 years of active-duty service — and the volunteer work she always did as a Soldier continued as she transitioned into her current role as an Army civilian. She recalled one memorable moment on a Wednesday night in a church here in 2006, when she heard the words of a hungry child.

“On Wednesday nights, we always fed the kids,” she said. “To this day, I still don’t know why, but this particular Wednesday, we did not feed at the church, and I was tasked to take the kids home. I heard a little child in the back say, ‘What are we gonna do? The church didn’t feed us tonight.’ It broke my heart.”

So, Marshall said she took the children to a restaurant.

“To see those kids, realizing they were hungry for real — my kids, when they say they’re hungry, they’re saying they don’t like what’s on their plate — but these kids were hungry,” she said. “I watched them eat, and then I saw one of them put food in a bag. I asked her why, and she said her mom hasn’t eaten either. That was here in our community, and that broke my heart.”

Inspired, Marshall worked with a national charity and organized a food truck to distribute donated food for the area, at a cost of about $25,000.

“The community came together, and we made it happen,” she said. “We’ve done four trucks since then.”

In addition to feeding the hungry here, Marshall took on another helping role for children in the area when she aided in organizing what she called the back-to-school extravaganza.

“That’s where we provide book bags, school supplies, haircuts and personal hygiene items for local students,” she said, noting the extravaganza has now taken place for the past 19 years and is still running strong.

Two years ago, Marshall also worked to open a homeless shelter here, and she said she’s already working to open a second one.

“I don’t think we realized just how bad the homeless situation really is here,” she said. “We’ve had it filled just about every day. To me, that is one of the most rewarding things that I have volunteered my service to, is to help out homeless. We’ve had veterans, families, single people — but that’s been a blessing.”

Getting Marshall this award required the tracking of thousands of hours of her volunteer work over nearly 20 years, but Waynesville Mayor Pro Tem and Ward III Councilman Sean Wilson thought it was worth the effort — Wilson called Marshall a phenomenal community leader.

“I really thought it was fitting to nominate someone who has had such a great impact within our community,” he said, noting Marshall is one of only two people he’s ever considered worthy of this level of recognition. “I think we need to recognize people for the time they are giving up. I know they don’t do it for the awards, but to show appreciation is just to say (the volunteer work) doesn’t fall on deaf ears, that we really appreciate volunteerism. I’m a great advocate for volunteerism within our community, so I like to recognize people who do great things at their own cost and sacrifice.”

Wilson presented Marshall with her award on the first Sunday of the New Year at the church she attends — he said he purposely made it a surprise for her.

“I thought surprising her would be the icing on the cake because when you forewarn someone that they’re going to be receiving something, they start formulating what they’re going to say, but I really wanted to give it to her in her most raw state,” he said. “It’s great to present an award of that magnitude in front of the people she’s setting an example for every day. I thought it was a great way to celebrate her and what she contributes to our community.”

Marshall’s enthusiasm for helping people also extends to the service members she assists at work, said USAPPS 1st Sgt. Mark Verry, who has worked alongside Marshall since 2016.

“I couldn’t be prouder to work with her,” he said. “Throughout, she has been the embodiment of servant leadership and people first. She champions food and toy drives around the holidays, easing the stress of young Soldiers and their families. She has made connections within the community, which provided opportunities for Prime Power students to volunteer with community back-to-school events and much more.”

Marshall said she would like to retire from government work in about five years. She plans to move back to Alabama and then do some travelling.

“I’m not a big fan of the foods of each country, I just like to go,” she said. “I like to see new things. I like the outdoors.”

One vacation still on her bucket list is a trip to San Francisco, she said.

“I want to go to a Golden State Warriors basketball game and sit in the front row to see Steph Curry,” she said.

Until then, Marshall offered a piece of advice — something she has followed throughout her life.

“The only time you should look down on a person is when you are looking down to give them a hand to come up,” she said.