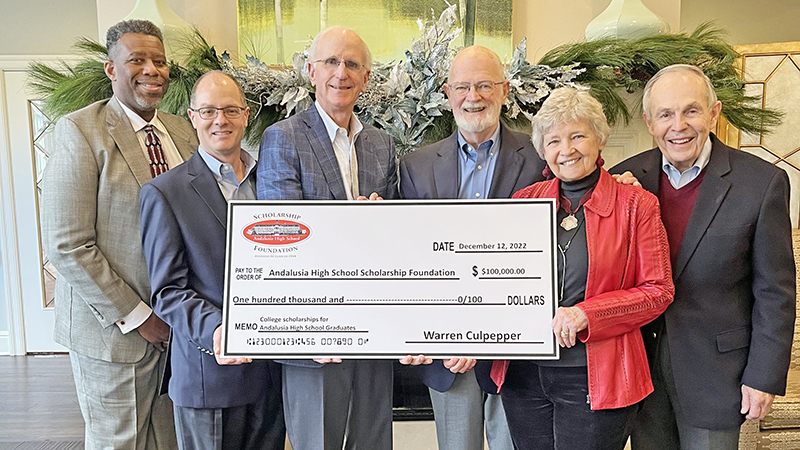 The Andalusia High School Scholarship Foundation recently received its largest single gift when Warren Culpepper, Class of 1960, presented officers with a check for $100,000.

Culpepper, who lives in Atlanta, said he decided to make the contribution because he attributes most of his business success to the education foundation he earned at Andalusia High School, for which he said he has “profound gratitude.”

“To the extent I have succeeded in my business career, I credit Clyde Simmons in helping develop my ability to write,” Culpepper said of the long-time AHS English teacher. “In 1979, I started my own business as a management consultant to technology companies. In order to make myself known, I published a newsletter. Initially it was free, but after a year I had such demand for it that I charged a subscription fee, and the newsletter became a source of revenue. Without the grounding in English that I had from Miss Simmons, I doubt I would have done as well as I did with the newsletter or my consulting practice.”

“I also recognize the impact of James Arthur Wilson in stimulating my interest in physics and its mathematical underpinnings,” Culpepper said, referring to the former AHS principal and science and math teacher.

“As you may know, I was one of four AHS Class of 1960 graduates who went to Sewanee—The University of the South. Probably better than half of our fellow students there had attended exclusive prep schools, and I was shocked to discover their high level of academic preparedness,” Culpepper said.

“Nonetheless, I believe I was the only freshman who was immediately assigned to sophomore level math classes. And while most of my Sewanee freshman physics class struggled for passing grades, I made A’s. Thus, AHS well prepared me for Sewanee and for my later publication of research-based statistical reports.”

Culpepper said he has previously made generous donations to his college alma mater, and now wants to support his high school alma mater.

“This year as I have been wrestling with how to best make my charitable gifts, it dawned on me that it was AHS, and not Sewanee, that had best prepared me for business success,” Culpepper said. “And while most students at Sewanee today come from highly privileged families, I know that is not the case for most students at AHS. Thus, I hope my gift to the foundation might help give one or more capable students a chance they otherwise wouldn’t have.”

The presentation was made at a luncheon in Atlanta in December. Richard Anthony, who chairs the Scholarship Foundation’s board of directors, expressed his appreciation to Culpepper and said he hopes Culpepper’s generosity inspires others to remember the Andalusia High School Scholarship Foundation in its charitable giving.

“As college tuition costs have increased, we have strived to keep our scholarship meaningful and relevant, but continuing to raise money for the Foundation, and by investing those gifts wisely,” Anthony said. “Warren’s generous gift greatly enhances our ability to meet those goals.”

Scholarship applications are available in the guidance office at Andalusia High School.