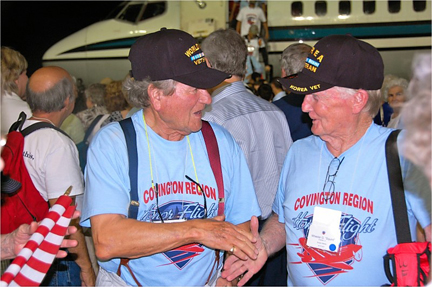 The CRHF board chartered a 737, which some 115 veterans, guardians, media and emergency personnel boarded Saturday morning. Despite a fog delay, the group traveled Washington, D.C., to see the World War II and Korean memorials, Iwo Jima memorial and Arlington National Cemetery.

“We were practically two hours behind schedule and the greeters at Dulles airport were still waiting to greet our HEROES,” CRHF president Tonitta Sauls said. “By the way, they stayed through the duration and there were approximately 75 greeters (volunteers) waiting on us once we arrived.

After receiving a warm welcome and many thank-yous, veterans were off to the WWII Memorial, Korea Memorial, the changing of the guard at the Tomb of the Unknown Soldier in Arlington National Cemetery, and the Iwo Jima Memorial.

Sauls said the schedule had to be “tweaked” to get the flight back on schedule after the fog delay.

“Unfortunately, in order to get back on schedule, we had to shorten our time at each memorial,” Sauls said. “This was a tremendous disappointment for me personally. However, I felt that it was important to our veterans to land back in Alabama at the designated time.  I did not want our return home greeters to get discouraged and leave before the landing.

Veterans said they were excited and touched by their trip.

“It was wonderful. It was awe-inspiring,” said Korean veteran Herbert Carlisle. “The World War II memorial was my favorite. There were so many more involved in that war. But the whole experience was good.”

“I really enjoyed the Korean Memorial and Iwo Jima, but I also enjoyed the World War II memorial,” he said. “Those boys done the job. I’m glad I went.”

“I would surely recommend it to other veterans,” he said.

The veterans weren’t the only ones the trip touched.

“My dad was a veteran,” Sara Mixson said. “I went as a guardian with my husband’s granddad. It was a very humbling experience. I encourage others to go on the trip as a guardian.”

This was the second trip sponsored by the Covington Region Honor Flight, which is designed to take World War II veterans and Korean veterans to see their memorials at the nation’s capital.

World War II veterans are dying at a rate of more than 1,000 per day, so the organization has made it a priority to take these veterans.

Most people don’t realize the details that go into this type of event, Sauls said.

“The safety of our veterans is of utmost importance,” she said. “Guardians are assigned specific duties when boarding and de-boarding buses and aircraft to help prevent falls and I must say, they, the guardians performed their duties exceptionally.

“I can only hope the trip was a meaningful to the veterans and guardians as it was for the CRHF staff,” she said. “We are so honored to live in a community that recognizes the sacrifices of all of our armed forces.  I look forward to many more opportunities serve those who have and continue to sacrifice their lives to serve us.  Remember freedom is not free.”