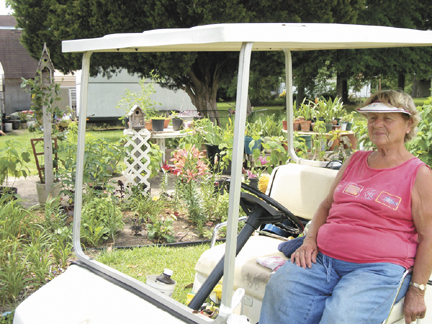 If your daily to-work route has you traveling Stanley Avenue, odds are you’ve seen Mary Hassell tooling about in her golf cart, tending to her “pretties,” as she calls them.
Sometimes on the weekends, folks park in her front yard, hoping for a cutting or some seeds from garden delights.
“The thing about gardening is that it’s a kind of therapy,” Hassell said – which is exactly the reason she and her husband, Rufus, moved from the Hope-well community in 2001. Hassell had just been diagnosed with cancer, and it was a “long way between the house and the store for a loaf of bread. Plus what if I needed help?” So the couple, who married in 1954, packed up their belongings and “little by little” moved into what used to be their rental house.
The home’s yard was flat and in need of some livening up, she said.
“I started with one bed and kept expanding until it’s what you see now,” she said. She didn’t limit herself to just flower beds either. Now, hanging baskets of Christmas cacti, ferns, petunias and greenery cascade from everywhere.
From nearly daylight to dark, Hassell can be found with her hands in the dirt.
“When I first got sick, it was rough,” she said. “Gardening became my therapy. It’s just you, the flowers and God. You can get out there and talk to the Lord and enjoy what He has put out in front of you.
“There’s no one to bother you,” she said. “You can get out there and fuss at Him if you need to. You can pray if you need to. Whatever your heart feels like it needs. That’s why I think it’s good therapy.
“There were a lot of days when I need that,” she said. “Still do.”
Hassell said she’s been in remission from colon cancer for nearly nine years, as well as almost six years from throat cancer. She said her time in her garden gave her ample opportunities to get “right” and be OK with the path that God had given her.
Now, those paths are no longer the metaphoric kind. Green trails curve among the front, side and back yard of the Hassell property, dotted with botanicals – hydrangeas, amaryllises, lilies, hibiscuses, day lilies and roses.
Oddities like bottlebrush trees with their red feathery flowers and a weeping mulberry tree keep fellow gardeners coming for clippings.
And one might say that Hassell’s talent kind of “crept like a vine” and spilled over into neighbors’ Billy and Pam Doster’s yard.
“You should have seen (the Doster’s) yard,” she said. “It was smooth. (Billy) said he saw mine and wanted to do something like it. Now, you should see it.”