“Growing up this was an honor I could never imagine,” he said.

Horry played for coach Richard Robertson at Andalusia, coach Wimp Sanderson at the University of Alabama and was part of seven championship teams in the NBA. In his acceptance speech, Horry said, “Coach Robertson and Coach Sanderson had a handful in me.”

A large crowd of family and Andalusia friends were on hand for the occasion. 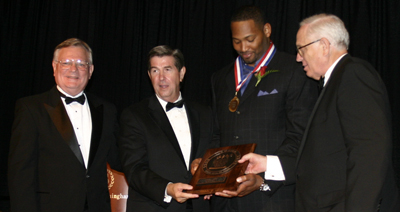 Robert Horry is inducted into the Alabama Sports Hall of Fame.