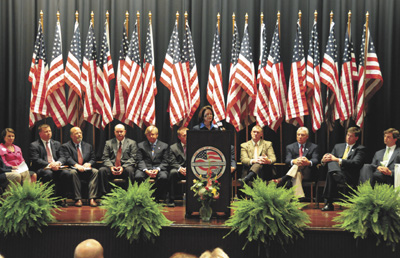 The two men in the only local race on next Tuesday’s ballot both argued in a political forum Tuesday that their experience makes them the best qualified person to represent Covington County in the Alabama House of Representatives.

Mike Jones and Greg White are seeking the Republican nomination for the House race. Jones said he has a proven history of service as an Andalusia City Council member who made himself accessible to his constituents with regular town hall meetings. White cited his years of experience as chairman of the Covington County Commission, where he presented 14 balanced budgets to the commission.

Asked about the recently approved federal health care bill and its impact on Alabama, Jones said, “It’s a mess and it’s going to be a bigger mess” that will create a need for “very difficult decisions” to be made in Montgomery.

“We need to send someone to Montgomery to make these decisions.”

Asked if he would support a perennial push by some in the state to remove the sales tax on groceries, Jones said the idea was good, but the state couldn’t afford to remove the tax.

Posed a question about gaming, Jones, an attorney who specializes in divorces, said he has seen that “gambling destroys families.”

He said he opposes gambling, but would not oppose a “clean, up-or-down vote” on the issue because he believes Alabamians would vote the issue down.

White was asked if he would support a property tax increase to balance state budgets.

“Property taxes have to be on the ballot, so what I think won’t make that big of a difference in the decision,” he said.

However, he said, he does support initiative in referendum, which doesn’t restrict the power to get issues on the ballot to the legislature, but establishes measures with which the public can bring issues to the ballot.

Asked how he would change the procedures used to create state budgets, which have been prorated in recent years, White, an accountant, said he believes budgets should be based on a five-to-seven year average, rather than the previous year’s figures.

“The state would be in much better shape,” he said.

Asked if he would propose or support immigration legislation similar to t hat passed recently in Arizona, White said, “I have no intentions of proposing a bill.”

He said he believes the existing federal immigration laws are sufficient and should be strongly endorsed.

The winner of Tuesday’s Republican primary will face both Democrat David Darby and independent candidate Don Cotton in November.

Darby said the biggest issue facing Alabama is getting people back to work and that the training programs offered in the state’s two-year college system are a great way to prepare people for jobs.

He said he supports letting Alabamians vote “up or down” on the electronic bingo issue. He said he didn’t support the first proposed bill because it created a monopoly for some gambling interests.

“Insurance take your money and tell you what they won’t cover,” he said.

Cotton was asked if he supported gubernatorial candidate Tim James’ proposal that the state’s driving test be given only in English.

“I have no problem with that proposal,” Cotton said, adding that he has driven in many foreign countries with his Alabama license, but that if he took a driving test in France, he’d expect it to be written in French.

He said the state needs a more realistic approach to budgeting and that down cycles should be expected.