As the Memorial Day weekend approaches, every Covington County resident can say with all certainty, “Here comes the traffic.”

And it’s that traffic that area municipalities and businesses look forward to each year – many calling this holiday season their “make it or break” period.

“Knowing that beach traffic was coming, we wanted them to have their store,” he said. “We didn’t want to wait until the summer.”

Sanicola said it typically takes 90 days to build a new store, but it was less than that here, he said.

“It was very fortunate that everything came in on time, and we were able to open before the holiday weekend.”

Sanicola said he doesn’t expect any more traffic than usual.

“On our weekends, we get the travelers no matter what,” he said. “Usually what happens you always get them the first and third days. But overall, we’ll be pretty busy like any opening store.”

With a population of fewer than 2,000 residents, Florala officials have begun pursuing everything from increasing the number of businesses in its downtown area to a deal to construct an electronic bingo gaming complex.

“These months are crucial to us because of beach and holiday traffic,” Williamson said. “Others might complain when they see long lines backed up at red lights, but we welcome it. We don’t want people to say, ‘Oh, what a pretty town,’ and drive right on through.

“We want them to stop and eat and shop,” he said.

Which is music to the ears of local proprietors, specifically those selling gas, food and antiques.

Carolyn Allen, manager of the Florala Tom Thumb, said May, June and July are “fantastic” months for the convenience store, prompting an increase in staff during the summer months.

“Gas is our biggest seller,” Allen said. “We couldn’t have a more perfect location to catch all the traffic. If you’re going to the beach, you’re going to drive by the Tom Thumb.”

Since the bulk of holiday traffic generally travels down U.S. Hwy. 331, Jerry Kimbril of Stateline Mini-Mall decided to a drastic step to promote all that Florala has to offer – a 6’ x 8’ LED screen facing oncoming traffic. It promotes everything from “Congratulations to the 2010 graduates” to the goofy golf course located on the store’s corner.

“They said this will be our busiest time of the year,” Ard said. “Although, for us, business has been great every weekend. Believe it or not we’re still on ‘spring break’ we say, because of the number of tourists. Every Saturday, we’re packed out.”

And just as a wheel on a car goes round, so does the cycle of sales tax revenue.

In Opp, Mayor H.D. Edgar said that while the traffic through the city has cut down since the bypasses were installed, they still get a smaller percentage of people who do still stop by.

“This benefits our restaurants and gas stations,” he said. 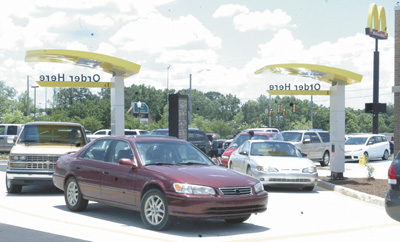