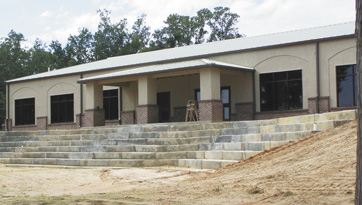 Work is scheduled to begin again in about two weeks on Florala’s Lake project, which was put on hold due to funding issues.

“We’ve been told construction should get under way in about two weeks or so,” Williamson said. “We are so very happy to see things get going again.”

The Lakeshore Boulevard site has been vacant since July 2009.

In September 2009, the state said there was no funding left to complete the 10,400-square-foot community center, which at the end of July boasted bare sheetrock and concrete floors and no ceiling. A year earlier, the State Parks Joint Legislative Committee approved $1 million for the project. An additional $1 million in labor and equipment cost was obtained through the U.S. Air Force Reserve’s Innovative Readiness Team (IRT) program.

By November, the Alabama Department of Conservation said the community center and amphitheater project was more than $50,000 over budget and only 75 percent complete.

In April, it was announced funding had been secured for the project.

Local residents had hoped to celebrate the upcoming annual Masonic celebration in the building; however, “maybe next year.”

“Things are beginning to happen here in Florala,” Williamson said. “The entire community is working together to ensure a bright future for Florala. I’m not sure how long the project will take, so maybe next year the building will see its first summer of use.”