It is likely the best Christmas present she ever received.

Some 12 years ago, Toby Hollinghead’s daughter gave her a paint set for Christmas.

“I put it in a drawer and I didn’t use it for a year,” she said. “One day, I took the set out and painted a big sheet of paper.”

Hollinghead said it wasn’t something she thought she would be good at.

“I pushed the paint around for a little while,” he said. “When I started doing this, a flood gate of memories came to mind.”

“I liked what I did. It’s like that with all of my paintings,” she said. “With that, a passion was born.”

Hollinghead said she does all of her pictures from memory; she doesn’t typically paint from pictures.

“God guides my hands and heart,” she said. “It generates right out of my head. I can see the images pop up on my canvas. I get restless before a painting comes along. My husband says I’m a dreamer. I get in a mood before I paint. Most of my paintings come as a result of chance meetings and conversations. The hardest part is knowing when they are done.”

Hollinghead has recently returned to her painting, after being involved in a terrible car accident in May 2009.

Hollinghead said her healing process after her accident has been a slow go, but said God has taken care of her.

Prior to her accident, she owned the Grab Bag Gallery, but said she closed it down after her accident.

Currently, she is redoing an old log cabin next to her residence to turn into her gallery and studio.

In addition, she has an exhibit on display at Elba’s Just Folk Coffee House, which is the business’s first venture into visual arts.

“We are delighted to have Toby’s work here,” said owner Mart Gray. “This is our first commissioned piece we’ve done. We are thrilled with the style and everything about it.”

“I was commissioned to do a special piece for the facility,” she said. “They gave me free reign on the painting. My work is like a story. It relays more than just interior design.”

The painting showcases a group of people in front of a cabin-type facility, and is called “Dinner on the Ground.”

Her work is also on display at Marcia Weber Art Objects in Montgomery.

“She’s one of the leading artists in folk art,” Weber said. “She’s done a lot for the folk art world.”

Hollinghead said she just finished a show at the Crestview Public Library at the beginning of the month.

Through Weber, Hollinghead’s work has traveled to New York City.

“Marcia has a three-day show every year,” she said. “One of the actresses on ‘LA Law’ purchased my painting. I was ecstatic over it. I haven’t been to New York, but my work has. In fact, my work has been to California, Las Vegas, New York and Georgia.

“God has blessed me, by putting good, caring people in my life that have furthered my art,” she said. “He’s put those who know how to further the art in positions around me. If I were out trying to sell my work, I wouldn’t have the imagination and freedom to do these paintings.”

The greatest part of painting for Hollinghead isn’t the money she makes selling the paintings or the recognition she gets. It’s the fact that she touches people’s lives.

“Touching people’s lives is the icing on the cake,” she said. “When someone sees a piece and they are moved, it wakes up something in me. It’s supposed to speak to you. Everyone has their own interpretation.”

Hollinghead related an experience in a Florida gallery.

“There was a lady whose husband was stationed at Eglin and she came in a lot to view my ‘Mama Wasn’t Hungry’ piece,” she said. “She told me she couldn’t afford it but wanted to look at it. Her husband got relocated to Texas and he called me and asked me to ship the painting to their new house, so he could surprise her.”

Hollinghead said she painted this particular painting from childhood memories when her mother wouldn’t eat because they didn’t have enough food to go around. Hollinghead said she has probably painted more than 1,000 paintings and has sold at least 700 of the paintings.

“I still have some of the first pieces I painted,” she said. “I like to take them out occasionally and see how much I’ve grown.” 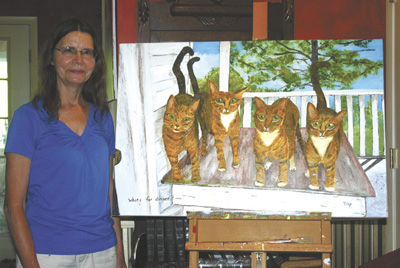 Each day, we should all say a 1-minute prayer for America

“Someone has said if Christians really understand the full extent of the power we have available through prayer, we might... read more