The skeleton of what will be the new Andalusia Police Department training facility is now in place, said APD chief Wilbur Williams.

Delivered last Friday, the 7,500 square-foot metal building has been under construction for approximately one week. It is located on a 15-acre parcel off of Academy Drive and on the property adjacent to the department’s firing range. Once completed, the building will boast an 85-person capacity classroom and two smaller classrooms with a capacity of 30 each, as well as offices, restroom facilities and a garage area.

“Hopefully by Tuesday, you’ll be able to see some ‘skin’ on roof and maybe by the end of the week the brickwork will be under way,” Williams said.

“Once the outside is complete, the inside crews can work regardless of the condition outside,” he said. “Then things should move fairly quickly.”

Move-in date has yet to be determined and depends largely upon how quickly the parking lot and landscaping can be completed, he said.

“We’re holding off scheduling any classes because of the timing, but I expect that a tentative date for the opening will be Sept. 1,” he said. “We should be able to announce that later this summer officially.”

Williams said renovations at the firing range were completed this week. Williams said a competitive shooting event could be held at the range as early as this fall. That portion of the property is outfitted with 20 pistol lanes and a rifle area and a “shoot” house, used for close-quarters tactical training.

“We could go out there and shoot tomorrow for (APD) qualifying,” he said. “The new targeting system is complete, but we want to get the landscaping finished.” Williams said.

The property is also outfitted with a 6-inch water main and fire hydrants that could allow for the property to be utilized in the future as a public safety training facility.

“We’re very excited about this facility,” Williams said. “There is no other like it anywhere in south Alabama, maybe even the state.” 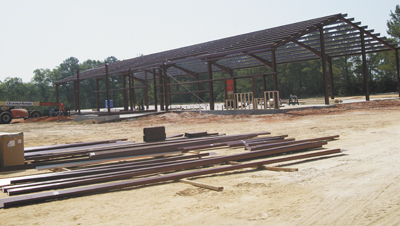 Business and property owners in any Covington County historic downtown area are invited to a downtown revitalization workshop on June... read more