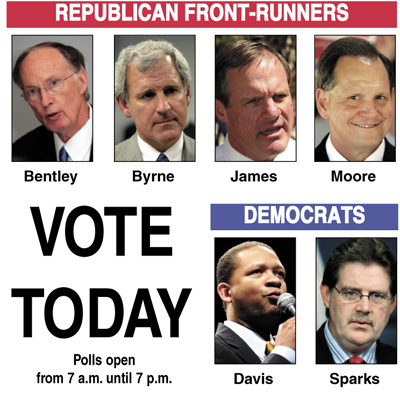 MONTGOMERY (AP) — Alabama voters face a long ballot today, Tues., June 1, as they pick party nominees for all constitutional offices, legislative and congressional seats as well as many local offices such as sheriff and county commissioner.

At the top of the ballot are the candidates for governor. The Democratic race between Congressman Artur Davis and Ag Commissioner Ron Sparks will be decided today, but the Republicans are likely to be forced into a runoff election on July 13. A candidate would have to pull a majority of the vote to avoid a runoff between the top two vote-getters, and the latest polls show the four front-runners — Dr. Robert Bentley, Bradley Byrne, Tim James and Roy Moore – in a close race.

Outside of the governor’s race, the hottest action has come in the Republican race for attorney general, with Birmingham lawyer Luther Strange seeking to unseat incumbent Troy King, who has lost the backing of some top GOP leaders in his feud with Republican Gov. Bob Riley over electronic bingo casinos.

Three Democratic attorneys, Michel Nicrosi of Mobile, James Anderson of Montgomery and Giles Perkins of Birmingham are facing off in the Democratic primary for the right to face the winner of the King-Strange race in the Nov. 2 general election.

Other contested primary races for state office on Tuesday’s ballot:

STATE TREASURER — Former banker Young Boozer faces former State Treasurer George Wallace Jr. for the Republican nomination. Much of the attention in the race has focused on the state’s prepaid college tuition program, which is struggling because of rising tuition and a shaky stock market.

AGRICULTURE COMMISSIONER — An in-your-face YouTube ad by Republican candidate Dale Peterson brought national attention, and ridicule, to the race as he rode a horse, carried a gun and promised to run “thugs and criminals” out of state government. Peterson faces farmer Dorman Grace of Jasper and former Alabama Forestry Association executive vice president John McMillan. Glen Zorn, the assistant state agriculture director, does not have opposition in the Democratic primary.

U.S. SENATE — Four-term Republican Sen. Richard Shelby is the lopsided favorite to defeat Clint Moser of Mobile in the GOP primary. Seeking the Democratic nomination are Bill Barnes of Birmingham and Simone De Moore of Mobile.

School’s out; what’s in store for summer break?

School is out and the Memorial Day weekend has officially passed – summer break has begun. For rising second graders... read more