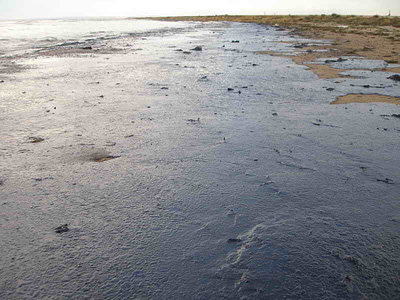 The long-term effects of the Deepwater Horizon oil disaster would be much less toxic if the oil were allowed to remain on the surface.

Dr. Bob Shipp, chairman of the University of South Alabama’s department of marine science and a recognized expert on the Gulf of Mexico, said Saturday he and every marine scientist he knows “abhors” the use of chemical dispersants to deal with the oil spill.

Shipp spoke to a group of Alabama newspaper editors and publishers in Orange Beach on Saturday.

“They are toxic,” Shipp said of the dispersants. “The truth is that it is BP’s intent to get as much oil off the surface as possible.”

He said the company doesn’t want the public to know the extent of the oil spill. Dispersants push the oil down into the ocean, he said, where oil sediment potentially settles in the food web. The effects will be increased as they move up the food chain, he said.

BP’s defense, Shipp said, is that the dispersants are “EPA-approved.”

The components of the dispersant are proprietary, known only by the maker, Shipp said, which leaves marine biologists worried about the long-term health of the Gulf and its creatures.

“If we preserve the habitat, the species will rebuild,” Ship said.

While it is heartbreaking to see birds covered in oil, it is more important to preserve the habitat, he said.

If the oil remains on the surface, a lot of it evaporates, he said. The remainder can be skimmed or burned.

“The tar balls are the least harmful of all possible effects,” he said. “As far as I can tell, their main rationale is the beach factor and the beach is the easiest to clean up.”

Of particular concern to biologists is sargassum, the floating seaweed that is found in the Gulf in patches ranging in size from a backyard to hundreds of acres. Shipp said it’s every bit as important as the oyster reefs in terms of habitat. Tuna, billfish and mahi totally depend upon sargassum, he said.

Sargassum, he said, is the reason the Gulf has such a proliferation of fishes. As long as it survives, the Gulf will recover.

“Red snapper live 30 to 40 years,” Shipp said. “If you lose this year’s spawn, the species will continue.”

Most fishes don’t migrate in search of food.

The good news, he said, is the current population is the “strongest and best it’s ever been.”

However, Shipp said he expects that before the season is over, “fishing will cease everywhere” in the Gulf.

Last month, Gov. Bob Riley appointed Shipp to the state’s Conservation and Natural Resources Advisory Board after the scientist loudly protested the use of dispersants.

In addition to his responsibilities at USA, Shipp is president of the federal Gulf of Mexico Fishery Management Council and the director of the Alabama Center for Estuarine Studies.  He was associate director of the Dauphin Island Sea Lab for 10 years.

Business and property owners in any Covington County historic downtown area are invited to a downtown revitalization workshop on at... read more