MONTGOMERY (AP) — Temperatures have hit 100 degrees in parts of south Alabama and the heat index is high on the coast where work crews are cleaning up oil on the beaches.

National Weather Service officials said Monday that there is no heat advisory in effect at this point but that high temperatures are expected to continue in the 90s — some areas in the very high 90s — the rest of the week.

It’s above normal in central and north Alabama as well, and the forecast is for sustained high temperatures and heat indices there, too.

Jason Beaman of the weather service office in Mobile said the sea breeze on the coast was “not really doing a good job” because it was raising the humidity level, sending the heat index on the beach into the 107-degree range, brutal for workers in clothes on oil cleanup duty.

Temperatures rose to 100 degrees Sunday in Dothan and 99 in Montgomery and similar numbers were forecast across South Alabama on Monday.

Huntsville hit 96 degrees Sunday — the record for the date is 100.

“The normal high for the date is 86, so we’re quite a bit above the normal,” said Chelly Amin, a meteorologist with the NWS office in Huntsville.

While no heat advisory was issued, weather officials said those with strenuous outdoor work should take breaks in a cool place and drink plenty of water.

The National Weather Service predicts highs will reach 97 in Covington County today, and there is 40 percent chance of rain. 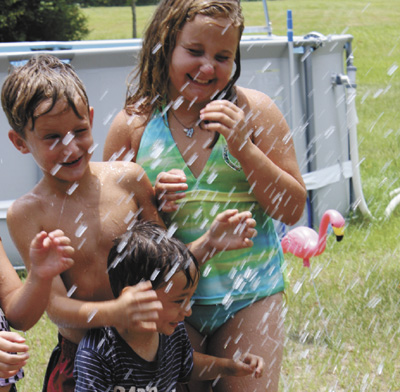 Hayden, Hunter and Hannah Blair had a blast beating the heat Monday, playing in the water hose and splashing in the pool. Temperatures reached nearly 100 degrees in Andalusia Monday.