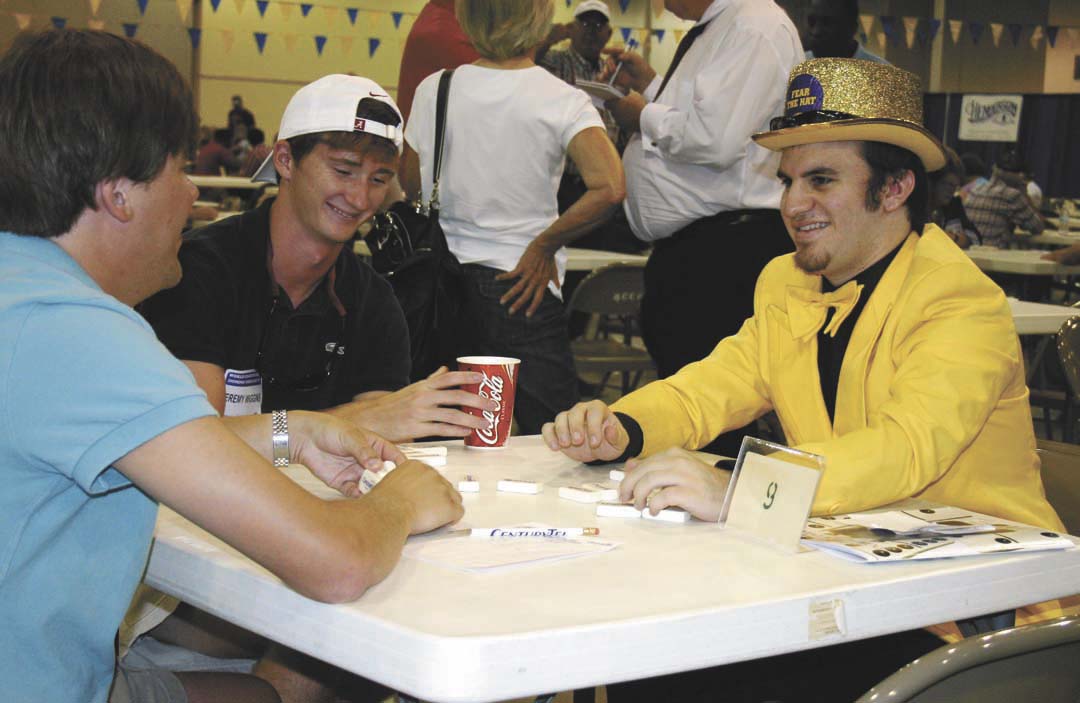 Chris Authement of Baton Rouge, far right, usually arrives in Andalusia in colorful attire. This year was no exception. His jacket was embroidered with “The Who Dat Leprachaun” on the back.

The sweepstakes event includes a seafood buffet at the conclusion of play in the first day of the club’s annual World Championship Domino Tournament. Five hundred $100 tickets were sold in the sweepstakes.

When there are 10 tickets left in the hopper, those holding tickets are given an opportunity to split the jackpot. Friday night, those final tickets were held by Andalusia Regional Hospital; Robbie Odom and Michael Smith; Mike Snowden; Jimmy Baker; Troy Richburg; Linda Hartin; James Kelsoe and Dr. Charles Tomberlin; Michele Gerlach; Dallas Henderson and his granddaughter Jessica Foley; and Don Harrell.

Snowden wasn’t present, but his proxy said he would only be willing to split if he were in the last five.

World Championship Domino Queen Lauren Powell kept drawing numbers. Numbers held by Harrell, Hartin, Baker, Odom and Smith, and Andalusia Regional Hospital were drawn. Snowden’s made-in-advance decision was good: He was still in at five tickets and other ticket holders agreed to split the pot five ways, for $3,000 per ticket. Snowden, Richburg and Gerlach each won $3,000, while co-ticket holders Henderson and Foley and Kelsoe and Tomberlin won $1,500 each.