A Henderson Street resident on Thursday helped the Andalusia Police Department apprehend a man who was burglarizing her neighbor’s vehicle.

Sgt. Ray Dixon said the woman observed the interior light on in her neighbor’s Jeep Wrangler and walked outside with her cordless phone. She saw an unknown male sitting in the passenger seat rummaging through the Jeep and contacted police. The burglar spotted the neighbor, got out of the Jeep and tried to hide behind it. At this time, the neighbor yelled at the burglar, who dropped a white plastic cup containing coins he had stolen from the Jeep. The burglar fled the area.

Sgt. Roger Cender observed a suspect matching the burglar’s description run into a small patch of woods in the area and instructed the other officers to set up a small perimeter. Officer Cody Warren with his K9 partner, Klod, then went into the wooded area and located Denarieya L. Smith, who is known as D. L. Smith. Police also located a second article in the area that had been taken from the Jeep.

After Smith was identified by the neighbor, police arrested him for unlawful breaking and entering a vehicle which is a class C felony and carries a $10,000 bond, and theft of property in the third degree, a Class A misdemeanor with a $3,000 bond.

Smith was out on felony bonds for recent burglaries in the Andalusia area at the time of his most recent arrest. This current arrest has revoked the previous bonds, preventing Smith from getting out of jail again.

APD Assistant Chief Mike Bowlan said, “I am very proud of the efforts that the entire “D” shift made in this case. This shows what can be accomplished with a little help from citizens who care about what goes on in the community.

“The quick thinking of the good citizen watching out for her neighbor and taking the initiative to get involved may have kept the victim in this case from loosing valuable property and/or personal belongings,” Bowlan said. “Sgt. Roger Cender, Officer Cody Warren, K-9 Klod, Officer Matt Wilson, and Officer Anthony Hattaway are to be commended on their rapid response and quick thinking. “

Bowlan said the APD encourages citizens to keep their vehicles locked, and valuables stored in a more secure location than in a vehicle.

“Gone are the days of not locking the windows and doors,” Bowlan said, adding that items such as computers, cell phones, iPods and expensive sunglasses are easily sold or traded. 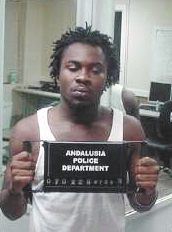 With school starting in less than a week, health department officials are reminding parents to come early for those required... read more