Comin’ back home to coach 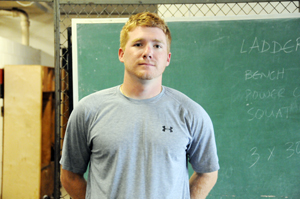 New assistant baseball coach Will Cammack comes back home to does what he loves. | Andrew Garner/Star-News

Born and reared in Andalusia, new assistant coach Will Cammack has come back home to do something he loves — coach baseball.

Cammack said he knew he wanted to be a coach when he was a freshman at AHS, where he graduated from in 2004.

After high school, Cammack played for LBW on a scholarship for two years, and then went on to finish his college career at Huntingdon College in Montgomery on the mound as a pitcher.

Before coming back to Andalusia, Cammack spent the last two years as an assistant coach at Brewbaker Technology Magnet School, also in Montgomery.

Cammack isn’t the only assistant coach the Bulldogs have on the team this year. In addition to head baseball coach Jonathan Rasberry, linebackers coach Matt Johnson will help out, too.

“From what I’ve heard, (Rasberry) hasn’t had much help in the past two years,” Cammack said. “I think with the addition of coach Johnson and myself, it’s going to help coach Rasberry a lot as far as him being able to focus more on certain areas without primarily focusing on pitching, and coach Johnson on junior varsity.

“That would help Rasberry out a lot as far as what he wants to do,” he said. “He’ll have more eyes out there to help him out a lot.”

Cammack said he can bring a “positive attitude” to the program, making sure players are “upbeat” in the dugout and they keep their heads up during games.

“I’m real quiet, and I’m real positive with the kids,” he said. “It’s just keeping a positive attitude with the kids in the dugout and not getting down on the players and their teammates — that’s the main thing.

“You’ve got to stay positive with the kids even through rough times,” he said.

When asked what his coaching philosohpy is, Cammack said it all has to do with “having fun” on the field.

“That just boils down to my philosophy in just having fun and everything falls into place,” he said. “There is a fine line between having fun, and being disciplined at the same time.”

Cammack, a special education teacher at AES, is the son of Walter and Susan Cammack of Andalusia and is celebrating his 24th birthday today.­­­

Searching for the title