EMA urges residents to be prepared

Emergency response officials said Wednesday that while none of the 14 named storms of the 2010 hurricane season have made a local impact, that doesn’t mean it won’t happen.

Currently, there are three storms swirling about in the open ocean – Igor and Julia, category 4 hurricanes; and Tropical Storm Karl. From forecasts predictions, each appears it will miss the Gulf Coast and Covington County.

“And even though these storms are shearing off away from us, it should serve as a reminder the threat is still out there. “Forecasters are predicting that the threat will extend to the end of the season,” she said. “So, what that means, is that we are no where out of the woods. You should still prepare your home and your property for when a storm hits.”

Merrill Davis, executive director of the county chapter of the American Red Cross, said, “The Red Cross says that we should do more than cross our fingers and hope for the best. We have to be prepared and be ready when disaster strikes.

“Natural and human-caused disasters can strike suddenly, at anytime and anywhere,” he said. “There are three things that everyone can do that can help make a difference – get a kit, make a plan and be informed.”

For more information on how to construct an hurricane kit or to establish a safety plan, visit www.RedCross.org. 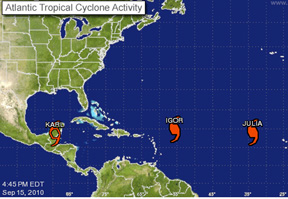 Three named storms are swirling in the Atlantic and Carribean. None are expected to hit Covington County. | National Hurricane Center graphic