Parents beware: Alcohol, tobacco use up among high school students

Statistics of the 2009-2010 Pride Survey show that alcohol and tobacco use remains prevalent among the area’s high school population – specifically among sophomores and seniors.

Superintendents of the county’s three school systems presented the results Thursday to a group of area religious leaders. Each year, students in grades six through 12 are questioned about the prevalence of alcohol, tobacco and marijuana use, the perception of risk, age of first use and other indicators of substance abuse patterns.

“If you were to lay all of our results down on top of each other, it would be unreal how the statistics would match up,” Watson said. “This is not a centralized problem. It’s everywhere.

“At school, we educate,” he said. “(Students) know drugs will kill you. When students have a change of heart, they change. There’s no amount of education that will change that. That’s why it’s so important to have involved parents, involved ministry and community involvement.”

In each of the systems, the average age students first tried the three drugs was 11. Students mostly use the drugs at a friend’s house at night or on the weekend.

Smithart said the most startling statistic for his system was that only 61.3 percent of seniors think of marijuana as harmful.

“The most important thing that this survey showed us is that if we’re waiting until health in high school (to teach the effect of drugs), we’re too late,” he said. “We need to tailor that education to get them before the age of 11. We need to get our kids involved, because studies show a child who is involved makes good grades and stays out of trouble.”

In Andalusia, statistics were presented that tracked the same groups from then sixth graders to seniors, and that a total of 689 students were surveyed – 99 in sixth grade; 117 in seventh; 124 in eighth; 110 in ninth; 94 in tenth; 90 in eleventh; and 55 in the twelfth.

Admitted use of tobacco increased from 13.4 percent of sixth graders polled to 49.7 percent of seniors.

“Our children are born innocent,” Smithart said. “When they become teenagers, they start to assert their independence. They are hard -wired to take risks.”

Smithart said, of Opp’s results, the survey “exposed some significant problems,” and that parents and friends should serve as “positive role models” for students.

“The information was quite startling,” he said. “But education is not the answer (to fight drug use). They all know that drugs can kill, what alcohol can do to you, what tobacco can do. We can educate all day long, but if it’s not coupled with substantial life changes, it’s ineffectual.”

Admitted marijuana use was low for middle school students, with less than 6 percent of eighth graders admitting usage; 2.2 percent seventh graders and 1.4 percent of sixth graders; however, those numbers jumped to 35 percent of the 62 seniors who said they use marijuana. 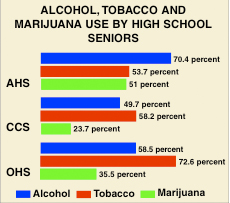