To say that Brig. Gen. Walter D. Givhan, Thursday’s featured speaker at the Covington County Veteran’s Day Ceremony, knows something about the military would be an understatement.

Givhan is scheduled to speak immediately following the parade, at approximately 10 a.m., at the Andalusia Veterans’ Memorial Park, located behind city hall. His address will be followed by a wreath laying ceremony with a 21-gun salute and the playing of “Taps” in memory of the nation’s fallen soldiers.

Givhan currently serves as the Commandant of the Air Force Institute of Technology at Wright-Patterson Air Force Base in Ohio. 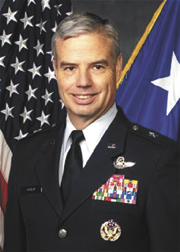 Givhan, a native of Safford, Ala., graduated from Morgan Academy in Selma and the University of the South in Sewanee, Tenn., where he was a National Merit Scholar. He served as the U.S. air liaison officer to the commanding general, French ground forces, for operations Desert Shield and Desert Storm. He has commanded a combat training squadron, an operations group, an air base wing and an air expeditionary wing.

His previous staff assignments include deputy military assistant to the Secretary of the Air Force; Chief of the Congressional Action Division for Air Force Legislative Liaison; Chief, Combat Forces Division, Directorate of Programs; and Director, Secretary of the Air Force and Chief of Staff Executive Action Group, Headquarters U.S. Air Force. He was also a Military Fellow at the Council on Foreign Relations. He is a command pilot with more than 2,500 flying hours in the T-37, T-38, T-1, AT-38, F-15 and A-10 aircraft.