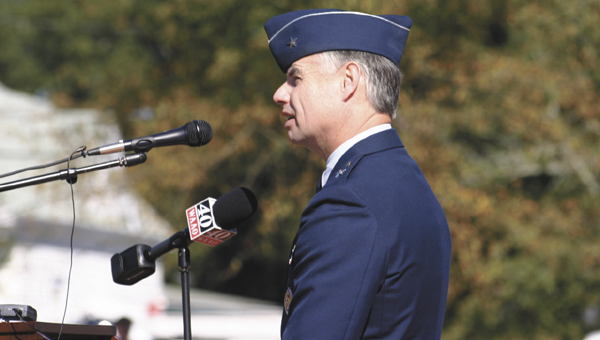 Brigadier General Walter D. Givhan, U.S. Air Force, said that Veterans Day, once known as Armistice Day, was originally intended not only to honor veterans, but also those Americans who had supported the war effort from the home front.

For that reason, he said, he was pleased to celebrate Veterans Day 2010 in Andalusia, and to be the guest speaker for the city’s Veterans Day program.

“You were strong, steadfast and generous,” he said, adding that members of his unit learned to quickly recognize patriotic packages from Andalusia that contained Carolyn Hart’s pecan pies and Pennye Anderson’s pound cakes.

As a native Alabamian, he said, he was pleased to teach members of his unit who were from “other places” about the Southern favorites, adding, “I believe their accents deepened after they ate them.”

“It raised our spirits to know you supported us and I thank you from the bottom of my heart,” he said.

Afghanistan is a country the size of Texas with a very poor road infrastructure and without almost any rail.

“Air is absolutely essential” for efficient travel and an effective military, he said.

Afghanistan has had an air force since 1920, and indeed had a “formidable” air force in the 1980s, he said.

“But there was very little left by the time we got there, except Afghan people willing to work.”

Givhan said he and others worked to build an air force “tailored to meet the needs of the Afghans.”

He said he adopted as his motto “ask the Afghans,” and urged those under his command to approach their work with creativity and cultural sensitivity.

Givhan, who is multi-lingual, said, “If this boy from west Dallas County can speak three languages, anybody can.”

At present, Givhan is the commandant of the Air Force Institute of Technology at Wright-Patterson Air Force Base in Ohio.

His speech was followed by a 21-gun salute and the laying of wreaths at the veterans memorial for veterans, POW/MIA, and medal of honor recipients.