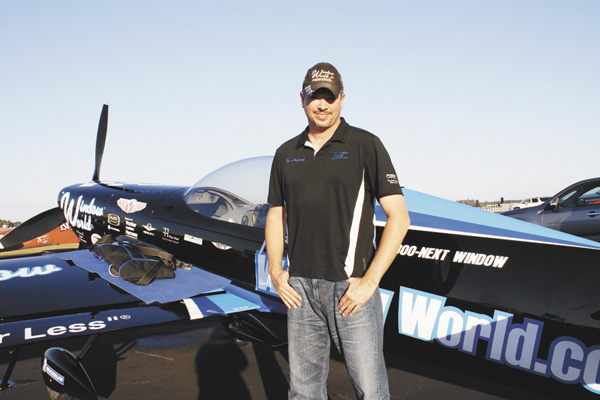 Rob Holland of Ultimate Airshows will be one of the main acts of the Andalusia-Opp Air Show today. | Kendra Bolling/Star-News

Flying is what Rob Holland knows best, after all, he’s been doing it for nearly 20 years.

Today, Andalusians will have the opportunity to see him in action as part of his “Ultimate Air Shows” gig, which is one of the highlights of the 2010 Andalusia-Opp Air Show being held at the South Alabama Regional Airport.

“I’ve been doing air shows for eight years,” he said Friday. “So far this year we’ve done 24 shows all over the U.S. and Canada, and this is our last show (for the year).” Holland and company have performed in the New England area as far north as New Hampshire and into Ontario and as far south as Cocoa Beach, Fla.

Holland’s obsession with aviation and aerobatics came at a young age, he said.

“My father took me to an air show where I saw an airplane flying upside down,” he said. “It’s something I knew I had to do.”

He became a licensed pilot when he was 18 and has accumulated more than 9,500 hours of flight time in more than 156 different types of aircraft including Piper Cubs, gliders and high performance aerobatic machines.

During the Andalusia show, Holland will pilot a North Carolina built MX2, which has a more than 385 horsepower aerobatic engine, with a maximum speed of 253 mph.

Holland’s show includes maneuvers such as “hammer heads,” where the aircraft flies straight up, nearly stops and comes back down again, so it’s no surprise his motto is “fly it like you stole it.”

“I’ll be doing a solo performance and a formation act,” Holland said. “Each act is about 12 minutes long.”

State Troopers and Sheriff’s deputies will be on Hwy. 84 directing attendees where to go for parking.

parking will include SiTel, all of the land east of SiTel, airport entrances 1, 2 and 3.

Covington Area Transit System (CATS) will provide shuttle transportation to and from the air show at Andalusia-Opp Airport Saturday.

The pickup points will be:

Fares are $1 per round trip. Children 1 and under may ride free. No appointments needed.