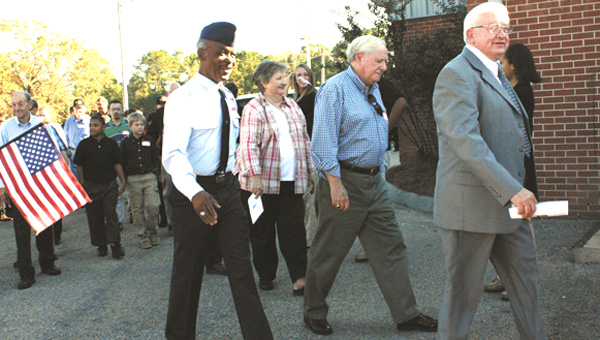 Local veterans walk through a receiving line Friday complete with flags and “thank-yous” for their services to the United States.

“I remember when I was in middle school,” he said. “Programs such as these were typically boring, so I’m going to try not to do that.”

Davis was instrumental in establishing operations in the nation’s first Hom-eland Security operation.

He attended the United States Military Academy at West Point where her earned a degree and was commissioned into the U.S. Army. He now holds a doctorate in public administration and public policy from Auburn. He served for 30 years on active duty as worked on a variety of assignments ranging from human resources director for the Second Armored Division “Hell on Wheels” to inspector General.

Davis compared being in the military to being on a football team.

“We all have to work together,” he said. “Veterans come for all walks of life.”

Davis showed clips from “Saving Private Ryan,” specifically the scenes where Tom Hanks tells the young solider to “earn it,” and then he dies.

At the end of his speech, Davis showed a final clip that shows the young soldier some 50 years later in which he and his family visit the cemetery where Hanks’ character was laid to rest.

The veteran speaks to the marker telling Hanks’ character he hopes he earned it, meaning he hopes he lived his life to the fullest and made him proud.

Davis encouraged the crowd to “earn” their right to live a free life.

Additionally, attendees were treated to patriotic musical pieces including a solo performance of “God Bless the USA” by AMS president Hampton Glenn and the AMS band played “Armed Forces on Parade” and other tunes.

Afterward, the veterans were treated to a reception in the cafeteria.