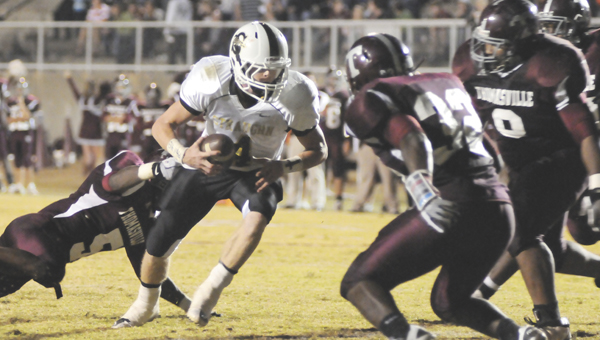 THOMASVILLE — Thomasville’s Tyler Hayes rushed 139 yards on three carries and scored two touchdowns to lead his team to a 49-14 Class 4A second round playoff victory over Straughn Friday night at Anderson Field.

“We’re disappointed, but I can’t help to be proud of them,” SHS coach Trent Taylor said. “It’s the first year in 4A (for our team), and I don’t think many folks would have thought Straughn would stick around in the playoffs.”

Hayes rushed in from 54 and 77 yards out in the five-touchdown first half for Thomasville.

Also helping Thomasville out in the first half were quarterback Tevin Watters, defensive lineman Dorell Owens and running back Charles Taylor. Watters rushed for one TD and completed a pass to Taylor for another; Owens rushed for a score.

Straughn’s two scores came on a seven-yard scamper from senior quarterback Josh Dewrell in the second quarter, and 73-yard rush from sophomore running back Chase Short in the third quarter.

In the second half, Thomasville added two scores on its 35-6 halftime lead on a 4-yard rush from senior running back Michael Thornton, and a 73-yard fumble recovery for a touchdown by Lukado Lanier.

On offense, Thomasville racked up 483 yards compared to Straughn’s 331 in the win.

“I think Straughn’s got a good football team for one,” THS coach Jack Hankins said after the game. “I was proud of our offensive line. I thought we blocked extremely well, and our backs did a great job of finding the holes. Our defense was a bend but don’t break type deal.”

Straughn’s first offensive possession resulted in a three-and-out, and Thomasville took over with 10:29 left in the first quarter.

Eighteen seconds later, Hayes rushed 54 yards for his first touchdown of the night. The PAT was good by Jimmie Lewis, and the Tigers took an early 7-0 lead.

On Thomasville’s next offensive possession, Owens capped off a 57-yard, six-play drive and scored on a two-yard rush with 2:04 left in the first quarter.

With 11:38 left in the first half, Thomasville added its third touchdown on the 77-yard rush by Hayes, his second and final touchdown of the night.

On the ensuing kickoff, Straughn fumbled the ball, and Thomasville took advantage with a one-yard dash in the end zone by Watters to help his team take a 28-0 lead. On a bad snap, Lewis kicked it through the up rights. Lewis finished the night 7-of-7 in PATs.

Straughn’s first touchdown of the night came on its next offensive possession when Dewrell ran the ball in from seven yards out. The PAT was blocked by Thomasville’s Christopher Davis.

Watters connected with Taylor to add the final touchdown in the first half on an 83-yard pass. Watters finished the night 3-of-7 for 116 yards and a score.

Thomasville took the first possession at the start of the second and completed an 86-yard, nine-play drive, culminating with the four-yard TD rush by Thornton.

Straughn’s playoff hopes fell out of reach on its next offensive series.

Dewrell was knocked to the ground hard, and fumbled. Lanier ran it back 73 yards for the score. Dewrell hurt his ankle on the play, but later returned to action.

After an interception throw by Dewrell on Straughn’s next offensive possession, Thomasville was held on downs.

Straughn would score its final touchdown on a 73-yard touchdown rush by Short with 8:47 left in the fourth quarter. Straughn senior Colten Lewis rushed it in for the two-point conversion.

Short led in rushing with 10 carries for 149 yards and a touchdown for Straughn.

Straughn ends its season with a 10-2 record.

Taylor said after the game that it has been a pleasure working with this group of players this year, especially the seniors.

“It’s been a tremendous run with these 20 seniors,” Taylor said. “They’ve accomplished some great things.

“I guess that’s the fun thing about this job is that you get to see a kid in our case at Straughn — they start as a seventh grader and eighth grader — you see them not only grow physically, but become more mature.”

Thomasville will play Dadeville next week in the quarterfinals.

Rob Holland of Ultimate Airshows will be one of the main acts of the Andalusia-Opp Air Show today. | Kendra... read more