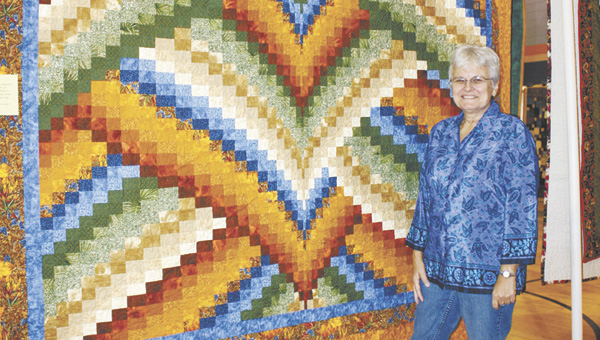 Kinston’s Karen Clark is shown in front of her Lightning Streaks quilt, which has nearly 2,500 pieces in the main portion of the quilt. Clark said it took a very long time to piece the quilt together and find the right fabric.

Some tell a story; some are a mystery, but all 150 of the quilted pieces at the “Visions of Thread and Fabric” quilt show share one thing – they were all made out of love.

The show, which is co-chaired by Karen Clark and Shirley Langford, is sponsored by the Sweetgum Stitchers: Covington County Quilter’s Guild. It was organized as part of this week’s “Absolutely Andalusia: Homecoming 2010” event and will be on display from 10 a.m. until 5 p.m., today, Sat., Nov 13, at the Johnson Park gym.

Quilts such as “Josh’s Life” by Opp’s Doris Wise tell a story of a young boy growing into a man. The quilt has different T-shirts from the young man’s life from marching band to Beta Club to his fraternity and proms.

Others such as Dozier’s Ruth James and Kinston’s Karen Clark have put together intriguing quilts that have an abundant amount of pieces. These two quilts are called “Lightning Streaks,” and are sure to draw the eye.

“When my grandma died, I asked for some of her dresses,” she said. “And I made this wall hanging.”

Other common themes are religious quilts such as “Fruit of the Spirit” by Andalusia’s Sandra Davis. The quilt has a diamond-shaped piece for each of the fruits of the spirit, from peace to self-control.

Patriotic quilts are also among the featured quilts, including “Stars Around the Great Seal of the United States” by Andalusia’s Marsha Day.

The organization will draw for a Homecoming donation queen size quilt made by several members of the guild.

All proceeds from ticket sales will go to the Dream Park renovation, the civic project for “Absolutely Andalusia: Homecoming 2010.”