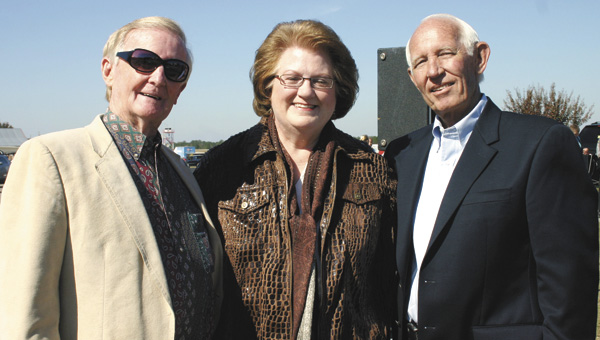 A Covington County native and Flying Tiger who died heroically in China was honored Friday when the firehouse of the South Alabama Regional Airport was dedicated in his honor.

The Flying Tigers was the nickname of the American Volunteer Group (AGV) recruited and commanded by Gen. (ret.) Claire Chennault to defend China from Japanese invasion. They went quietly to China before the United States entered World War II. Ben Crum Foshee was among the 100 pilots recruited.

Foshee was recruited by Gen. Chennault in the officer’s club in Miami. In China, he became Gen. Chennault’s personal pilot and friend.

“Ben was my favorite uncle,” Wheeler Foshee has said of his father’s baby brother.

The elder Foshee took a movie camera with him to China, and the family has some of his films.

In the summer of 1942, Wheeler Foshee spent the night with his grandmother and aunt. He recalled that the next morning, his grandmother looked out the window and saw a family acquaintance. Immediately she said, “It’s Ben.”

The friend had read on the front page of The Montgomery Advertiser that Ben Crum Foshee had been killed six weeks earlier, on May 4, 1942, when the Japanese attacked his group. Foshee was running to his aircraft when they were hit. He was wounded in the leg and bled to death before a doctor could get to him.

He was buried in China, but in 1946, his father paid a retired Navy commander to go to China and bring his son’s body home.

The Foshee family received personal letters of sympathy not only from the Chennaults, but also from Gen. Chiang Kai-shek and his wife.

“My grandmother completely lost her mind after Ben’s death,” Wheeler Foshee recalled. Ben was buried in the Fairmount Church Cemetery. His tomb was placed so that she could see it without getting out of her car. She was later institutionalized.

Wheeler and Crum Foshee were among those at the dedication.

“This was wonderful,” Wheeler Foshee said afterward. “This was the nicest thing that could happen to my Grandpa George and Grandma Ella, even though it was 65 years after it happened.”

Crum Foshee, who was named for his uncle, said the family was very proud.

“I was 4 years old when he was killed, and I well remember the emotion in the family,” he said. “He always was a hero with us.”

Crum Foshee said he has a son and a grandson who also carry their hero-uncle’s name.

Andalusia native Richard Daniel and Covington Historical Society president Sue Wilson led the efforts to have a memorial for Foshee at the airport.