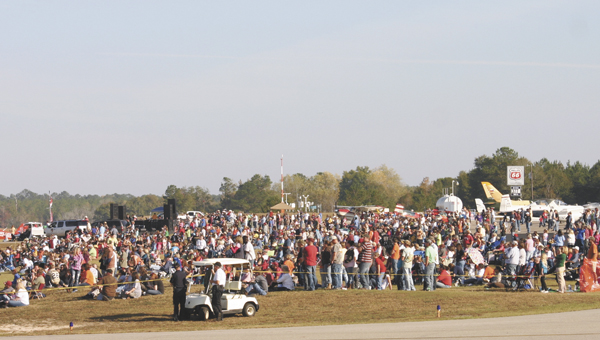 In addition to the crowd in  and near the airport’s reviewing stands, many people set up lawn chairs outside the airport gates to view the show, which was coordinated and staged by David Shultz Air Shows.

Working with Shultz to pull off the event were 21 airport employees, nine volunteers, 21 City of Andalusia ambassadors, members of the fire departments in Andalusia, Opp, and Babbie, and Advanced EMS.

There were 24 vendors on hand selling everything from BBQ sandwiches to toy airplanes.

And all over town, people are marveling at the scope and success, and wondering if it will happen again.

“The airport board meets Nov. 23 and will discuss future air shows,” SARA co-manager Jed Blackwell said. “At that time the decision will be made on a 2011 show and future years.”

Mayor Earl Johnson won’t get a vote, but that won’t stop him from lobbying for a repeat.

“We need to do the air show again next year and bring some top name entertainment afterward and we need to start working on it now,” he said.