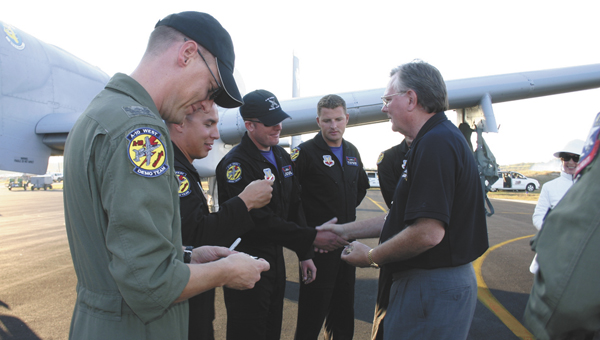 In addition to family and friends, this weekend’s Absolutely Andalusia: Homecoming 2010 event brought another old friend to the area – revenue.

Those at the Andalusia Best Western, the Holiday Inn Express and the Days Inn reported full occupancy.

Kim Jenkins, general manager at the Holiday Inn Express, said the hotel was “booked out.” The hotel was the host hotel of this year’s Air Force air show personnel.

“From Monday until Sunday we were packed,” Jenkins said. “Our revenue looks amazing this month, which is tremendous news. The impact of events like this is amazing for Andalusia, not only for the revenue, but also from a PR standpoint.

“I heard that a lot of other people left other venues to come to the air show,” she said. “It was that much of a draw.”

Jenkins said she hopes to see additional events of this type come to the area, which was the same sentiment expressed at the Andalusia Best Western and Days Inn. A three-day horse show at the arena, as well as two local funerals and the air show, helped to fill their rooms.

Huddle House employee Summer Savage, who was on duty Saturday, said the store “was packed.”

“We pretty much stayed that way until 1 or 2, and then, after it ended at 5, we had another round,” Savage said.

“We were pretty busy,” he said. “Actually a lot more – about twice as busy according to my numbers.”

“We’ve been slow lately,” she said. “Saturday, we were pretty steady because of the air show.”