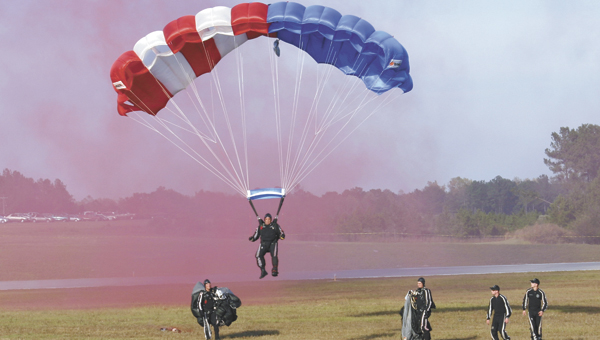 It wasn’t “written” in the stars for Opp Mayor H.D. Edgar to jump at Saturday’s air show.

Edgar had agreed to tandem jump with paratroopers; however, a last-minute discovery in the air show contract prohibited the jump.

“I received a call from Jed Blackwell (South Alabama Regional Airport co-director) about 8 Friday night saying he had misunderstood the contract,” Edgar said. “The FAA won’t let you tandem jump on the day of the show.”

Edgar said he was “disappointed.”

“I hate it because we had told all these people I was going to jump,” he said.

Still, Edgar’s no chicken. He participated in Friday’s practice run with a member of the U.S. Army Silver Wings Parachute Team, although he did get “sick.”

“I was fine until (the paratrooper) started going spins,” he said. “I sure was (nauseated).”

Edgar said he thinks Saturday would have been much more fun.

“Friday, I didn’t know what to expect,” he said. “It was good, but I think if I could do it again, it would be better.”

After a two-hour search Saturday, an Opp man was jailed after an alleged drunken domestic incident involving a gun and... read more