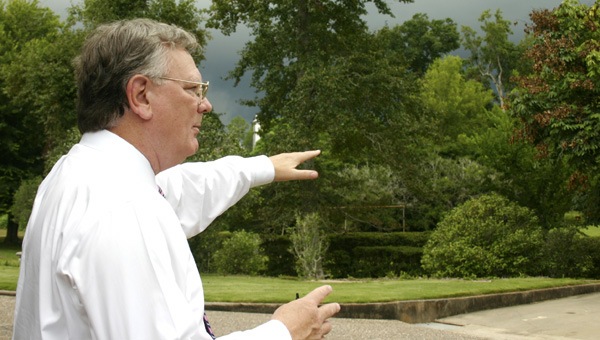 Mayor Earl Johnson discusses long-range plans for the development of a park that encompasses city hall and Springdale Estate.

The Andalusia City Council voted 3-2 Tuesday to purchase the strip mall between city hall and Springdale Estate, allowing the development of the 15 to 16 acres of the three properties into a central park.

Mayor Earl Johnson said the building that sits right on the property line will go away.

A Birmingham landscape architect who designed the gateway, the Veterans Memorial Park and the grounds of city hall visited Andalusia on Monday, toured Springdale and began the planning process for a park.

The property where the building now sits will be landscaped and will include a parking lot providing access to the east side of city hall.

The city is purchasing the property from John Tisdale, to whom they will pay $350,000. Councilwoman Hazel Griffin made the motion, and Councilman Will Sconiers seconded. Mayor Earl Johnson voted with them, while Councilman Kennith Mount and Councilman Jason Jewell opposed. Councilman Terry Powell was away on business.

The sales contract requires Tisdale to invest half of the purchase price, or $175,000, in improvements to the Prestwood Building, which he owns, to make it ready for tenants. If the improvements cost less than $175,000, the remaining monies are to be invested in other properties downtown.

City clerk John Thompson said the city is working with the USDA to put together long-term financing for the park financing with a 3.5 percent interest rate.

• Approved the Westgate Development Agreement, also with Tisdale, in which the city will rebate half of the sales tax generated by any retailer Tisdale is able to recruit that provides a minimum amount of jobs.

Under the terms of the proposal, put together after Tisdale made a request, half of the sales tax generated by the potential retailer for the first five years would go into a trust fund managed by the city. The funds would be dispersed to Tisdale to match any money he spent improving property he owns in downtown Andalusia.

Johnson said the city has given incentives to two other retailers in the past, and said those businesses have helped Andalusia’s sales tax base remain steady during the recession.

• Transferred a retail liquor license to Mike Smith and Darren Raines of S&R Entertainment, Inc. for the Pitt Stop.