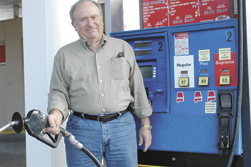 Curtis Simpson is ready to pump gas for the Imagination Library next Saturday. | Stephanie Nelson/Star-News

What do Dolly Parton, Gitty-Up-N-Go stations and books have in common?

One thing, the Imagination Library, a foundation founded by Parton – and implemented recently locally – that provides one book a month to children born at Andalusia Regional Hospital beginning Jan. 1, 2011.

To help get the program up and running, Roy Mohon, Gitty-Up-N-Go owner, has offered to let volunteers pump gas on Sat., Nov. 27, for program donations.

Curtis Simpson, local Imagination Library coordinator, said the act will go a long way in raising the annual cost of the program.

However, volunteers are needed to help the local non-profit, which operates under the umbrella of the Children’s Policy Council.

Simpson said he met with the hospital, who delivers an estimated 450 children a year.

“So we need $13,500 a year, and when we are expanded to cover five years, we’ll need about $67,000 a year,” he said. “Roy Mohon heard what we were doing and wanted to help. This was his idea. We’re going to be at eight of his nine stations. We won’t be at the McKenzie station.

“We need volunteers to pump gas, wash windows and help us collect tips,” he said. “(Mohon) has agreed to match whatever we collect.”

Simpson said he is looking for two people every two hours per station, or about 20 people.

“We’d love if someone would say they would take a particular station and act as a team leader,” he said. “But you don’t have to be associated with a particular group or business to volunteer. We need everyone.”