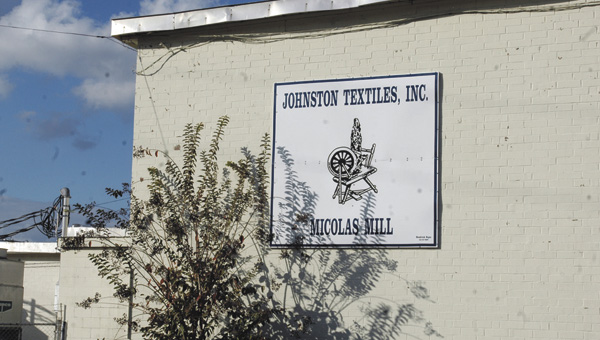 Some 135 employees at Opp’s Micolas Mill will be without a job in January.

Johnston Textiles, which owns the mill, announced Friday it would consolidate the weaving operation in Opp with its finishing operation in Phenix City, which is about 150 miles northeast toward the Georgia state line.

“The reason for the move is economically driven,” said manager Billy Whitehead. “If you have both in one area, it’s better.

“There are 135 employees who work here,” he said. “They will have the opportunity to relocate to the Phenix City operation.”

Whitehead said he has not spoken with employees on an individual basis to see who if any want to relocate.

“If employees don’t choose to relocate, they will be offered unemployment,” he said. “We are looking into other measures such as possible schooling.”

Whitehead said the mill will be downsized as the machinery is moved to Phenix City, but the entire plant should be closed by mid-January.

Opp Mayor H.D. Edgar said the city is unsure just how much of an economic impact losing the business will have.

“We certainly hate to see it close,” he said. “The economic impact to the city? We just don’t know how much that will be at the moment.”

Edgar said the city is currently working to find a replacement business for the mill.

“We hope we can get something to come and occupy the building,” he said. “We have a couple of prospects, and we hope that will come in and fill the void. We have an excellent workforce.”

Edgar said he plans to seek assistance from the state to help bring in more jobs.