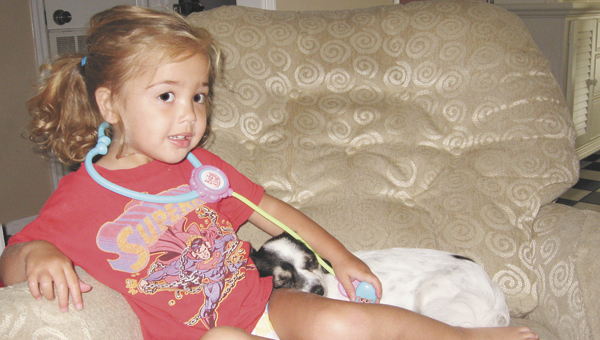 Three-year-old Paisley Hope Kennedy is shown with her therapy dog “Daisy,” who helped her learn to walk, talk and more. | Courtesy photo

Every time the family of Paisley Hope Kennedy hears “woof,” they send a silent thanks to God for their baby girl and a dog named “Daisy.”

Paisley, the 3-year-old daughter of Matt and Nicole Kennedy of Andalusia, was born premature at 31-weeks when “she just quit moving” in the womb.

“That was the day our lives changed dramatically,” Nicole said. It was touch and go for the small baby. And after an emergency c-section, the first time Nicole laid eyes on her daughter, “every part of her little body was hooked to some type of a machine.”

“I can remember so vividly hitting my knees when I left the hospital and arrived back to the Ronald McDonald House,” she said. “I literally cried out to God, begging him to spare my child’s little life. And immediately I just felt so much peace almost like he was wrapping his arms around me ,comforting me. We had so much hope and trust in God, that was where her middle name came from.”

It took a five-week hospital stay, bouts with pneumonia and later, when Paisley was 18-months-old, a trip to Children’s Hospital in Birmingham, before they received a diagnosis – leukomalasia, or excessive white matter on her brain. It was also discovered that Paisley was aspirating on liquid, causing her to choke, and doctors elected to put in a feeding tube.

It was there that the family also made another discover – pet therapy, a practice designed to promote physical, social, emotional and/or cognitive functioning of the patient, as well as to provide education and motivational effectiveness for a patient. Many different kinds of animals are used in therapy, but in the Kennedy’s case, it was a dog.

“It was unreal to see the reaction that she had when she received the pet therapy,” Kennedy said. “Once she was released, we committed to finding her the right dog, and that’s when we found Daisy.”

Kennedy said thanks to Christin Shiver at the Andalusia Animal Shelter, the family was able to make a perfect match between child and dog.

When the family arrived home from the hospital, Paisley was not walking, eating or talking. So they did what any other parents would do, they resorted to bribery.

“We told her if she didn’t eat and do the things that we knew she could do, she couldn’t play with Daisy,” Kennedy said. “It worked. Within approximately two weeks, Paisley was able to do all of those things.

“She learned to talk by bossing Daisy around, and it was just amazing how her verbal skills improved,” she said. “She learned to walk by pushing her Daisy in a stroller and shopping cart. I would threaten to give Daisy away if she didn’t eat her meals, so of course she began eating so well that the surgeon felt comfortable removing the feeding tube. Her neurologist could not believe that she had done so well, and she told us that she really never expected the feeding tube to be taken out.

“We are so thankful for Christin (Shiver at the Andalusia Animal Shelter) for providing us with such an angelic pup,” she said. “Paisley will tell you to this day that Daisy is her very best friend.