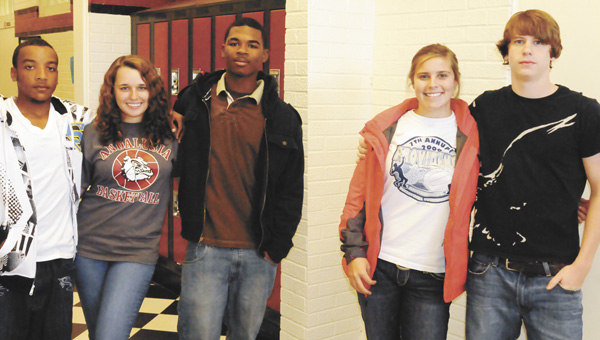 Today, the biggest college football game in Alabama will take place at Bryant-Denny Stadium in Tuscaloosa — the 2010 Iron Bowl.

The No. 2 Auburn Tigers will travel to face state rival No. 11 Alabama Crimson Tide in a game that many sports fans say is the only game that matters in a season.

Alaba-ma is entering today’s game with a 9-2 record after beating Georgia State last Thursday night 63-7. Auburn is spotless at 11-0 this season, and had a bye week.

Huddled together in the AHS library and grouped by their favorite team were Morgan Palmer and Aubrey Boyington for Auburn; and Grace Spears and Anna Bay McCord for Alabama.

“Alab-ama is going to win of course — that’s a matter of fact,” Spears said confidently.

McCord said it’ll come down to who wants to win the most.

“I don’t think you can ever say — yes, Auburn hasn’t lost yet,” McCord said. “It’s Alabama and Auburn. It’s never going to be one way. It doesn’t matter how the season goes before the game, it’s all about who wants it the most that day.”

On her team’s strengths this year, Palmer said Auburn is just as strong as Alabama was last year.

“They’ve definitely got a chance,” Palmer said. “It’s going to be a pretty equal game, and I think Auburn will win by 14 points.”

“It’ll be a close one for sure,” Boyington said.

Spears and Palmer gave their scoring predictions on the game today.

Spears said Alabama will win 31-28, while Palmer said Auburn will walk away victorious 21-7.

Refusing to stand together in the hallway at AHS, Auburn fans Jamey Doulin and A.C. Riley, and Alabama fans Emmanus Spears, Jakelyn Carter and Terrance Anderson talked about the match up.

For Riley, Auburn will win on the back of its defense.

“With Cam Newton — he’s not the only player, but defense wins ball games,” she said.

For Carter, she thinks Alabama will win because Auburn will get ahead of itself.

“I think it’s going to be 30-27 Alabama,” she said. “I think (Auburn) is going to get cocky because they think they’re going to win.

“They’ve got Cam Newton, but we’ve got (running backs) Trent (Richardson) and Mark Ingram,” she said.

And for Anderson, it will come down to a defensive win for Alabama.

“Offensively, just let Trent and Ingram do their thing,” he said.