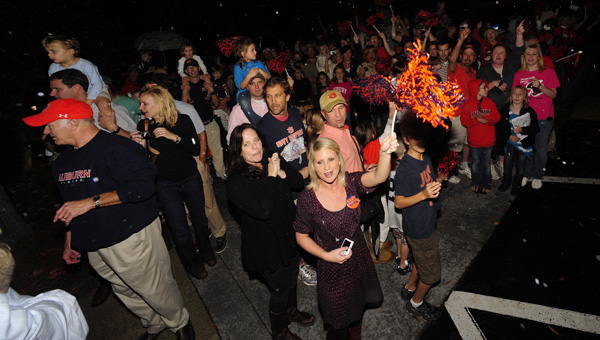 Tiger fans cheer as their team's buses pull into a Birmingham hotel Thursday.

Both Tigers and the Tide enjoyed had light workouts and practice on Thursday before the Tigers headed to Birmingham, where they spent the night before continuing to Tuscaloosa today for the Iron Bowl, which kicks off at 1:40 p.m.

Following a Thanksgiving dinner at 1 p.m. Thursday, the Crimson Tide held a brief walk-through to wrap up work on the Tigers.
The Tide football team held a 90-minute practice in shells Wednesday afternoon inside the Hank Crisp Indoor Facility to finalize preparations for Friday’s annual Iron Bowl against Auburn at Bryant-Denny Stadium.

Similarly,  Auburn players enjoyed a Thanksgiving dinner. Fans surrounded the Tigers as they left Auburn for Birmingham late Thursday afternoon, and another group cheered as their buses pulled into the hotel.
The game will be televised on CBS.­­­­­