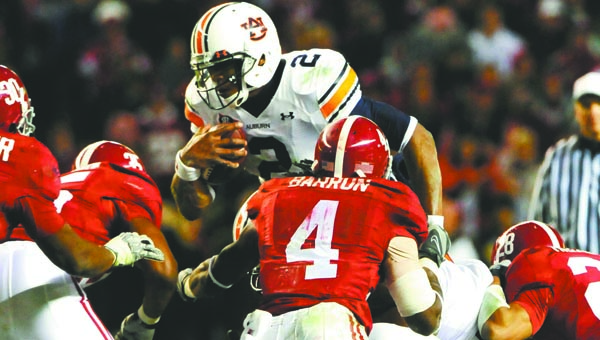 Auburn quarterback Cam Newton rolls over a pile on fourth down in the fourth quarter of the Iron Bowl yesterday. Andalusia native and ‘Bama player Nico Johnson (35) is shown, left.

TUSCALOOSA – The Auburn and Alabama football teams each treated their fans to a great half of football in Tuscaloosa Saturday, but in the end it was the Tigers who proved victorious, defeating the defending national champs 28-27.

Alabama led until the fourth quarter, when Auburn took the lead with a 7-yard pass from Cam Newton to Philip Lutzenkirchen. Wes Byrum’s kick was true, and the Tigers were golden.

It didn’t always appear it would end that way.

Alabama took the lead three-and-a-half minutes into the game and before halftime had extended it to 24-0. The Tigers only managed seven points in the first half, but answered with three more touchdowns in the second half, holding the home team to a field goal.

His word for the first half?

“I thought we did a really good job of keeping them off balance in the first half,” UA head coach Nick Saban said. “We threw the ball effectively, and we wanted to do the same thing in the second half, but we kind of lost our receivers at one point. We tried to run a little bit because of the circumstance we ended up in. Their defense played better in the second half, and we didn’t execute as well when we had opportunities. You have to give them some credit. We did a really good job of attacking them on the perimeter in the first half, and we probably didn’t do that enough in the second half.”

By the end of the game, Alabama’s Julio Jones, who hauled in 10 receptions for 199 yards and a touchdown, was sidelined with a bruised knee, and starting quarterback Greg McElroy, who set a new Alabama single-season record with 19 touchdown passes, was on the bench with a concussion. Darius Hanks, who suffered bruised ribs, was keeping them company.

The Crimson Tide jumped out to a 24-0 lead in the second quarter on its way to a 24-7 halftime lead.

After receiving the opening kickoff, Alabama marched swiftly down the field covering 71 yards in seven plays, capped off by a nine-yard Ingram touchdown run to take a 7-0 lead.

Following an Auburn punt, the Alabama struck quickly on its next possession. McElroy found Jones for a 68-yard touchdown on the second play of the drive to put Alabama up 14-0 less than six minutes into the game. Following another Auburn three-and-out, the Crimson Tide scored its third straight touchdown of the quarter after McElroy found junior wide receiver Hanks with a 12-yard touchdown strike. The drive covered 61 yards in 10 plays as part of 183 total yards that Alabama accumulated in the first quarter. On the other side, the Alabama defense held the Tigers to minus-eight total yards in the first quarter.

The Tide built upon the lead further in the second quarter on Jeremy Shelley’s 20-yard field goal, capping off a seven-play, 48-yard drive to make it 24-0 at the 8:01 juncture of the second quarter. Auburn would get on the scoreboard on the ensuing possession when Newton connected with Emory Blake, capping off an eight-play, 80-yard drive to make the score 24-7 at the half.

The Tigers narrowed the lead with a two-play drive when Newton connected with Terrell Zachery for a 70-yard pass.

Later in the third, Newton ended an eight-play, 75-yard drive with a 1-yard TD run.

The Tigers scored their fourth and final touchdown of the game on the opening possession of the fourth quarter to take a 28-27 lead. The Crimson Tide had the ball on two more occasions, but were not able to score.

Alabama finishes the 2010 regular season with a mark of 9-3 while Auburn finishes at a perfect 12-0, and will play South Carolina for the SEC championship next Saturday in Atlanta.