Red Level football coach Tony Ingram said he knew his team was going to make an appearance in the playoffs this season because of two things — the players coming back, and the new region in which his Tigers were going to play.

“I think a lot of people say we moved out of the tough region (in Class 2A, Region 1) — it was a tough region,” Ingram said. “It still is just for the fact that Leroy’s in there. Some of the balance of power shifted over there with Goshen and Elba playing like they did.”

This season, Red Level competed against Calhoun, Elba, Goshen, Highland Home, New Brockton, Samson and Zion Chapel, and finished with a 4-3 region record and a berth in the playoffs.

“It’s kind of my luck that we get out of the frying pan and into the fire,” Ingram quipped. “For years we’ve been waiting to get out of (Region 1). It isn’t weak by any means.”

After his team’s 20-12 win over New Brockton in week No. 2, Ingram said that was when he knew the team would make the playoffs.

“That was probably the key game to us because I still say that they’re one of the better teams in our region,” he said. “On the hooves, they looked as good as anybody would’ve played. They came in over looking us.

“Kids are funny like that,” he said. “They have to win over them one time to say I could do this.”

After looking over the schedule, Ingram said the loss to Highland Home will stay with him for a long time.

“Our schedule was pretty brutal,” he said. “I thought we beat the teams we should’ve beat.

The Tigers finished with a 5-6 record in a season that went back and forth in the wins and losses column, Ingram said.

“I saw a couple times where we were taking a couple steps forward, and then we started regressing,” Ingram said. “I think the grind of the season, and the injuries might have played a part in the playoffs game. I was really disappointed in our tackling against Southern Choctaw.

Right now, the Tigers have started voluntary workouts to get ready for the 2011 season.

After the Christmas break, Red Level will work out two days per week.

“That’s when our season starts,” Ingram said. “Hopefully we’ll build on what we did this year.” 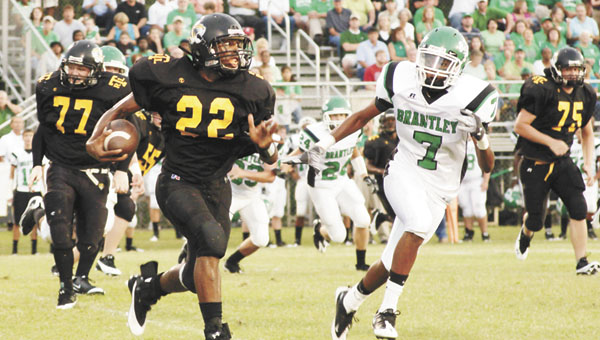 Red Level’s OJ McGee gains yardage in an earlier game this season. The Tigers finished with a 5-6 record and a berth in the Class 2A state playoffs.