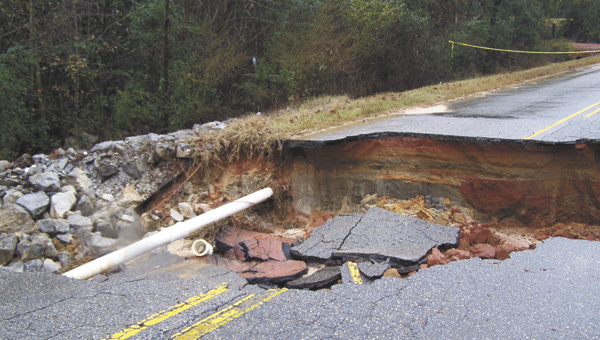 Today’s expected heavy thunderstorms bring with it a reminder that nearly one year, ago more than 10-inches of rain fell locally, causing more than $6 million in damages to county roadways.

Darren Capps, county engineer, said today’s situation is much different from that of a year ago, when in December more than 60 local roads were damaged because of the rains.

“Up until then, we’d had rain all year long,” Capps said. “Everything was saturated at this point last year. Then, that extra rain – that 10-to-12 inches – was enough to do us in.

“On the flip side, this year, fall was pretty dry,” he said. “In fact, there are some ponds that aren’t filled in and our water tables are low. We’ve also replaced a lot of pipe and cleaned the ditches – things we couldn’t do last year because it was too wet.”

In October 2010, the county received $3.7 million in Federal Emergency Management Agency funds for December’s damages. That money has helped to make emergency repairs, as well as a portion of the regular work on the project.

“I’d estimate 100 miles of roadways that have a lot of rock on them, and we’re still putting out rock,” he said.

Currently, road crews are working on repairing damages from both the December flooding and a similar event in March 2009.

“There’s a good bit of work left to do on the March projects,” Capps said. “I’d say we’re 30-40 percent complete on that set, but December, we’re about at 25 percent through with those projects.”

Capps said crews have made significant strides during the last four months.

“We’ve made a lot of progress during last four months, beginning in May,” he said. “Thanks to local rock quarries and good weather, two factors that helped us proceed. Still, there’s a lot of work to do.”

As for today’s weather, locals have no need of worrying about flooding despite the National Weather Service prediction of a 100 percent chance of rain.

Forecasters indicate some of today’s storms could be severe, with damaging winds and heavy rain. As the day progresses, temperatures are expected to rise to near 72 by 9 a.m., then falling to around 58 during the remainder of the day. Winds could gust as high as 25 mph and continue until nightfall; however, Wednesday is expected to dawn sunny with a high near 54 degrees.