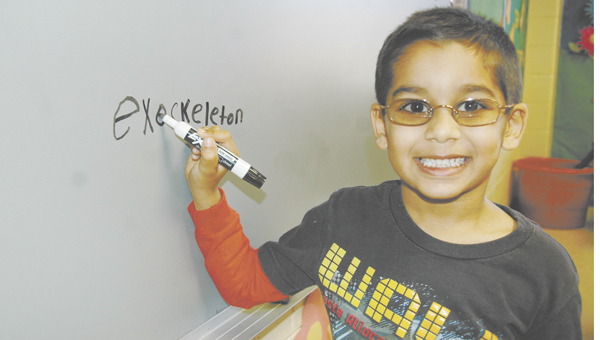 He’s so smart that the 5-year-old kindergartener at Straughn Elementary School beat out 35 other first through fifth graders to place fourth the school spelling bee Tuesday.

The word that knocked him out? Exoskeleton.

Dad Neil said his son’s spelling ability is only one of his many academic talents.

“I’m his dad, so I’m supposed to brag about how smart he is,” Neil said. “But when he was 2, his mother and I had gotten him some of those blocks with letters on them. Instead of using them to build towers, he used them to spell words. He started with ‘dog’ and ‘cat,’ and then went to reading everything.”

At present, Patel reads at a sixth grade level and has the math skills of a fifth grader. So, yes, Taj Patel is smart.

“Usually, really smart kids keep to themselves,” Neil said. “Not Taj. He’s friends with everyone and will talk to anyone who will listen.”

Taj is “100 percent sure” he likes school, but spelling isn’t his favorite subject.

“P.E. is my favorite,” he said. “Then, video games. I like contests, too, but I didn’t win (Tuesday). I studied hard, though. My dad and mom helped me. I like to do mind brain puzzles.

Dad Neil said his son wasn’t upset when he missed his word.

“He didn’t cry,” Neil said. “He walked over, and I gave him a hug. He said ‘I want to sit with the big kids.’ He wasn’t frustrated he lost. I was so amazed at the end. Everyone was clapping and giving him ‘high 5s’ and acted like he won.”

Right now, Taj is concentrating on earning his Accelerated Reading (AR) points. His current selection is “Nate the Great,” about a kid detective determined to solve the mysteries at his elementary school.

“I have four more books to go before I get to go to the treasure box,” he said.

Taj said he has one thing he’d like to accomplish before leaving kindergarten – “to become a bus rider.”

When asked what’s next on his accomplishment list, he quipped.

“Well, when the big hand gets on the six, I got to go to the library,” he said.