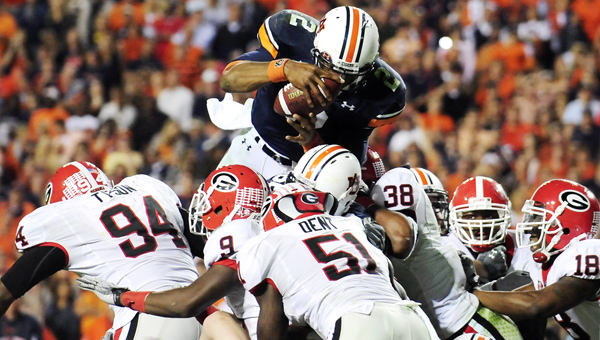 Auburn’s Cam Newton was declared eligible to play on Tuesday by the NCAA. | Photo courtesy of Todd Van Emst/AU Athletics

On Monday, the NCAA concluded that a violation of amateurism rules occurred, and therefore Auburn University declared the student-athlete ineligible for violations of NCAA amateurism rules, according to a press release from the college athletics governing body.

The press release indicates that, “when a school discovers an NCAA rules violation has occurred, it must declare the student-athlete ineligible and may request the student-athlete’s eligibility be reinstated. Reinstatement decisions are made by the NCAA national office staff and can include conditions such as withholding from competition and repayment of extra benefits. Newton was reinstated without any conditions.”

According to the press release, Newton’s father Cecil, and an owner of a scouting service worked together to actively market the student-athlete as a part of a pay-for-play scenario in return for Newton’s commitment to attend college and play football. The rules indicate that it does not allow individuals or entities to represent a prospective student-athlete for compensation to a school for an athletic scholarship.

Given the matter of the case, Auburn University has limited the access of Newton’s father to the athletics program and Mississippi State has disassociated itself with the individual, according to the press release.

“The conduct of Cam Newton’s father and the involved individual is unacceptable and has no place in the SEC or in intercollegiate athletics,” said Mike Slive, Southeastern Conference Commissioner in the release.

Auburn University Director of Athletics Jay Jacobs said the university is pleased with the decision.

“We are pleased that the NCAA has agreed with our position that Cam Newton has been and continues to be eligible to play football at Auburn University,” Jacobs said.

Last Friday, Newton helped lead the Tigers to a 28-27 win over rival Alabama in the 2010 Iron Bowl in Tuscaloosa. He threw for 216 yards and ran for 39 more as the Tigers rallied from a 24-0 deficit to Alabama.

Newton will try and help lead his team to an SEC Championship victory over South Carolina this Saturday in Atlanta at the Georgia Dome. Kick off is at 3 p.m., and the game will be broadcast on CBS (HD).