‘Intensity’ wins it for Red Level 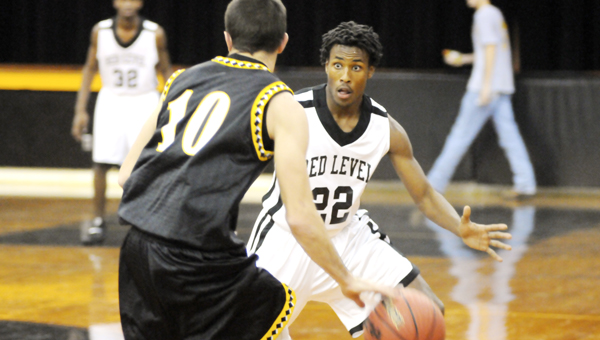 Red Level used its intensity and quickness right out of the gate to claim a 46-36 home win over Opp on Thursday night.

The Tigers completed their two-game series with the Bobcats on the cusp of taking two losses at the Flomaton Thanksgiving Tournament last week.

“We had good intensity, and that’s what we wanted,” Catrett said. “But, when you’re not playing fundamental defense like you’re supposed to and start reaching, you’re going to get in foul trouble. We’ve got to get in there and keep our position and not get lazy.”

From the start of the first period, the Tigers never let up on their intensity, cruising to an early 10-1 lead.

Catrett said the key at the start of the game was solid play on “defense.”

“Our best offense is going to be off of our defense,” Catrett said. “That showed at the beginning of the game.”

Opp (0-3) found itself on the free throw line, and managed a three-point play. After making one shot on a one-and-one, senior guard Steadman Gerber jumped up for a put back to slice into Red Level’s lead.

The Tigers led 13-4 after the first period, and the Bobcats came out and quickly put up four points on Red Level turn overs and smooth transitions.

Opp coach Ronnie Sansom said Red Level took control of the game early, and that’s what the difference was in the loss.

“They’re a very talented team and they shot the ball well tonight,” Sansom said. “We let them control the tempo early, and we can’t let them do that. We let the pressure get to us, and didn’t get set up on offense. We waited too late.”

But, RLS held its ground making shots on Opp turn overs to claim a 23-13 lead at half time.

Just like the start of the game, the Tigers pulled away in the second half, taking a 40-15 lead over the Bobcats late in the third period.

The 25-point lead would be the most Opp would allow Red Level during the night.

After trailing 41-20 after the third period, Opp outscored Red Level 16-5 in the fourth period with the help of Gerber, who led the Bobcats with 17 points. Most of his points came on essential put backs.

“Steadman’s been consistent, and getting better every game on the boards,” Sansom said. “We’re having to work our offense through him. We’re slowly but surely getting there.”

Opp senior Quadir Kincaid fouled out of the game that sent McGee to the line for two shots. The Tigers finished 15-of-31 from the line, and 7-of-8 in the first half.

Opp continued to bite into the Tigers’ lead, and pulled to within 10 points on a lay up by none other than Gerber.

Sansom said cutting into Red Level’s huge lead was a bright spot for his team.

“I’m proud of our guys,” he said. “We were down by 20 points, and cut it to within 10. “We’ve got to put a complete game together,” he said. “Some guys have to figure out what their role is. We’re playing hard, but hard only gets you so much. We’ve got to execute.”

The Bobcats will play host to rival Andalusia tonight in regular season action. Tip off for the B-team is at 4:30 p.m.

Red Level will travel to play Brantley. Tip off for the B-team is at 4:30 p.m.