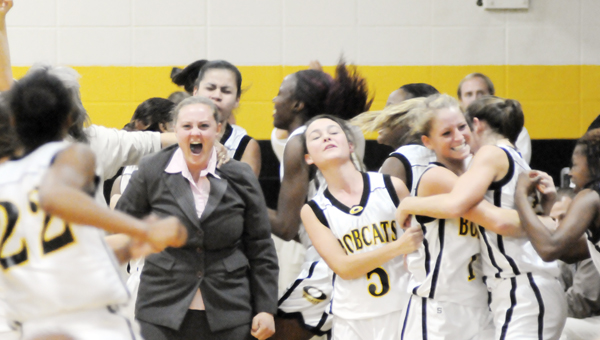 Opp’s Soyia Folmar had another great night for the Lady Bobcats, scoring 23 points to help lead her team to a 52-50 win over rival Andalusia on Friday night.

Folmar’s success came just one night after she scored 18 points to lead her team to a 50-30 win over Red Level.

The Lady Bobcats took advantage of missed Andalusia opportunities in the first half, nailing rebounds and put backs.

Andalusia’s Alexis Horton also had a good night with 23 points.

Horton helped the Lady Bulldogs take a 12-9 lead in the first period on back-to-back steals and lay-ups.

Gerber’s three tied the game, and eventually led 18-17 after the first period.

“They came out hitting those threes,” AHS assistant coach Teresa Herring said. “They couldn’t miss them at the beginning of the game. I really feel like we had a lid on the goal. “Some calls didn’t go our way, and the girls fought back though,” she said. “They never gave up, and they fought to the very end.”

The Lady Bulldogs continued to struggle on transition and defense to allow the Lady Bobcats to take a 22-16 third period lead.

Opp’s defense took control of the first half, only allowing Andalusia to score eight additional points to take a 35-24 lead at the break.

“We knew we had to take Horton out of the equation,” Gregory said. “But, she had a good night as well.”

Andalusia (5-4) outscored Opp 10-5 in the third period, and came back from nine points down in the fourth to within two points on a drive to the basket play by Horton.

With a 48-47 lead and 39.7 seconds left in the contest, Opp took a time out before Laiken Free went to the line for two free throws. Free made her two points to allow her team to a 50-47 lead. Free finished the night with nine points.

A few seconds later, and after Opp’s Nisha Stoudemire missed two free throws, Horton tied the game 50-50 with 17.1 seconds left on a jumper, and quickly took a time out.

After the time out, Stoudemire was fouled and she made the two free throws for the lead and win.

“I was really proud of the effort they showed,” Herring said. “Some shots didn’t go our way. Defensively, they stepped it up in the second half.”

Andalusia’s Shi’Amber Townsend also had a good night with 18 points.