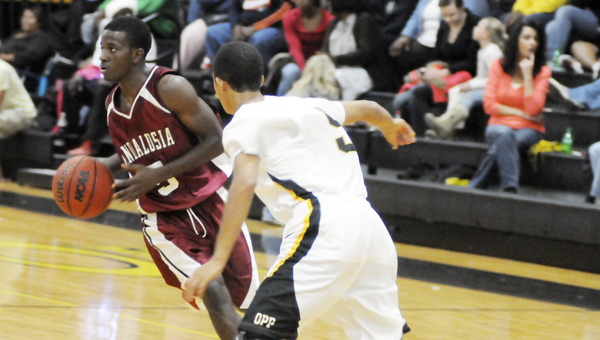 Andalusia will continue its longest running tournament this week as the Bulldogs will play host to the 44th annual Andalusia Invitational Basketball Tournament.

In 1967, coach Clayton Bryant, current AHS coach Richard Robertson’s predecessor established the tournament. And, at one time, every school in Covington County participated in the invitational.

The tournament will last from this Thursday through Saturday, Dec. 9-11, in the AHS gymnasium.

Robertson, who will enter his 36th invitational as the head coach, said he plans on this tournament getting a lot of attention, as it has over the years.

“I think we’ll have a lot of interest in it just because of the notoriety we’ve had over the years,” he said. “At one time, I had increased the tournament to 12 teams, but that had to cease because back in those days, you could play on any day of the week.

“Now, you can’t play but two days unless you’re in the football playoffs, which we were,” he said.

The invitational will have seven teams participating. The teams are Florala, Opp, Elba, UMS-Wright, Enterprise, Luverne and Andalusia.

Enterprise enters the tournament as the biggest school in Class 6A; Andalusia and UMS-Wright are the second biggest in Class 4A; Opp and Luverne are in Class 3A; Elba is in Class 2A; and Florala is in Class 1A.

“I expect it to be a good tournament,” Robertson said. “We don’t pair it up for our benefit, we pair it up to try and balance things out, and I’d like to say we’re very appreciative to the teams that are participating.

“As long as they would like to participate, they’d be welcome,” he said.

Robertson said the reason why he thinks the tournament has lasted as long as it has has to do with not letting it “go under.”

“It’s lasted so long because we won’t let it go under,” he said. “We’ve had snow storms, and we’ve had ice storms where we’ve had to restructure the brackets during the week of the tournament. During that one year, the road was so treacherous that we could not get all eight teams here, and we had to cut it to a four-team format.”

Robertson said in order for his team to be the “best,” they have to play the “best.”

“The last two years, we lost the first game of the Dothan tournament, and the winner went on to win the tournament itself,” Robertson said. “We understand that, and wouldn’t have it any other way. Like I tell them with the things we’re trying to do in our program, we want to play against the best because we want to be one of the best. That’s the nature of the beast.”

Andalusia will tip off its run at the tournament against Florala on Thursday night at 8 p.m. Admission is $5 per person each day.

Rebounding is key for AHS girls