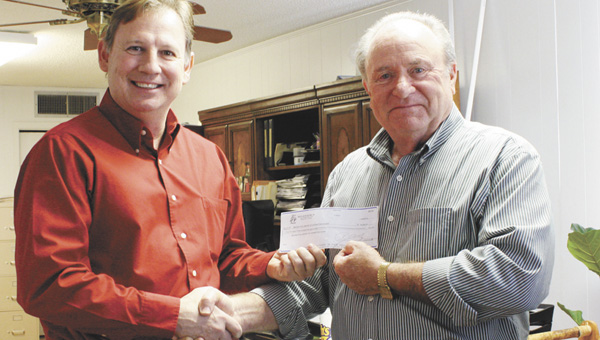 For the past two weeks, Covington County residents have volunteered their time pumping gas for donations to the program in the form of tips at local Gitty-Up-N-Go stations. Simpson said $1,624 was collected on Nov. 27 at the Andalusia locations, and $394.43 at the Florala location on Dec. 4.

Gitty-Up-N-Go stations owner Roy Mohon pledged to match the donations, plus 10-cents per gallon for all gas pumped.

“I’m just beside myself,” Simpson said. “I never had any idea that it would be this successful.”

Simpson said he wishes to thank the volunteers who came out and helped pump gas, and the residents who made donations.

“I want to give a special thank-you to Florala High School, who supplied all the help for the Florala drive,” he said. “I also want to thank the students at LBW who worked the station near Wal-Mart.”

“They (Florala Pharmacare) supplied us with an angel – Angie Scebbi,” he said.

Simpson said the organization is getting really close to its $13,000 goal, but doesn’t have another fundraiser in the works at the present time.

In January, the program will begin providing one book per month to children born in Covington County from birth to kindergarten.

The Covington County Economic Development Commission and the South Alabama Regional Airport Authority have scheduled an industry announcement for a... read more