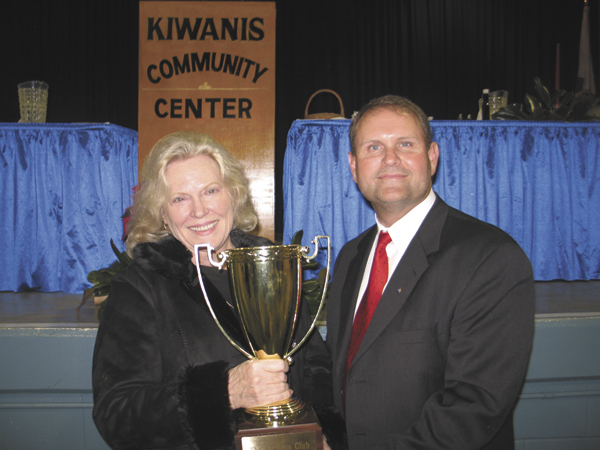 Barbara Nichols, shown with outgoing president Steve Thomas, was named as the Kiwanis Club’s citizen of the year.

The Andalusia Kiwanis Club honored Barbara Meredith Nichols as its 2010 citizen of the year during its annual banquet Monday night.
Nichols was honored for her efforts in coordinating Andalusia’s Home-coming 2010 event.
“The events throughout the week brought thousands of people to the City of Andalusia,” Kiwanis president Steve Thomas said. “Hotels were booked to capacity, restaurants had business doubled and retail stores showed higher sales.
Thomas said Nichols is known “for her experience, kindness, enthusiasm and dedication and is “a true cheerleader for the City of Andalusia.”
Nichols is an Andalusia native whose father was a three-term sheriff and her mother a devoted school teacher. She was taught at an early age to to make a difference in the community.
She was a member of the AHS Class of 1959, earned a degree from the University of Montevallo and earned a master’s degree from Winthrop College in Rock Hill, N.C. After retiring from 38 years in education, she returned to Andalusia.
She immediately became involved in the community, and has given of her time and talents to the Andalusia Arts Council, and served on the board of the Andalusia Country Club.
She has served as a motivational speaker for the regional Anchor Club Conference, teaches leadership workshops. She is a member of the Cynosure Club and a member of the city’s Tourism and Relocation Committee.
“She wanted to make a difference in Andalusia and started as a volunteer with the committee,” Thomas said. “Her attention to detail, her dedication and enthusiasm led to her appointment to the committee at the first vacancy.”
The club also recognized Gary Buck as the Kiwanis member of the year.
Dr. John Ed Mathison, longtime minister of Montgomery’s Frazier  Memorial United  Methodist Church, was the keynote speaker.
Other Kiwanis members recognized with lapel pins included:
• 40-year members Ed Short and Ed Buck.
• 35-year members Nick Johnson and Charley Cope.
• 30-year members Kenneth  Johnson and Larry Avery.
• 25-year member Rick Clifton.