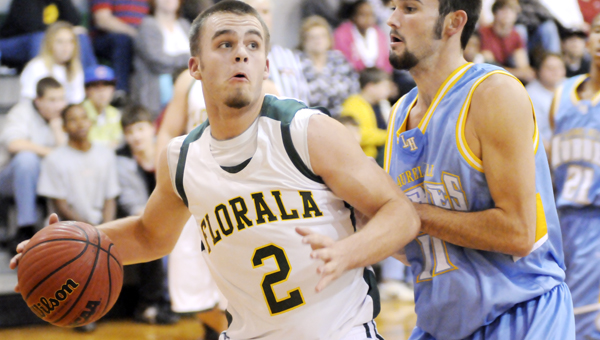 Florala came out on a hot streak Tuesday night in the first period against Laurel Hill at home, but the visiting Hoboes put up an impressive inside game attack and came away with a 60-42 win over the Wildcats.

FHS coach Brad Garner said the difference of the game came early in the fourth period, where his Wildcats were trailing by three points.

“We busted our tail, but it’s 42-39, and Erik (Vega) missed the three to tie it, and we go five straight possessions turning the ball over,” Garner said. “That’s the difference in the ball game. We sure didn’t give each other a chance to win.”

The Hoboes didn’t let up in the third period leading by as much as 11 points at 33-22 at one point in time.

During the contest, the Wildcats stepped up their inside game, but couldn’t get the ball to fall in the net.

Florala came to within three points of the tie on a jumper, but the turnovers enabled LHHS to take a 46-39 lead late in the fourth period.

The game got out of reach for Florala when the Hoboes took a 58-39 lead.

“We weren’t even in the game with them,” Garner said. “But we’re getting better.”

Vega led the Wildcats with 17 points, and J.B. Burleson chipped in nine points.

The Lady Wildcats were led by Mariah Thompson with 17 points. Paige Irwin added 15 points, and Justina Clissold chipped in 14 points.

Florala will travel to play in the 44th Andalusia Invitational Tournament tonight.

The Wildcats will play Andalusia at 8 p.m. at AHS.