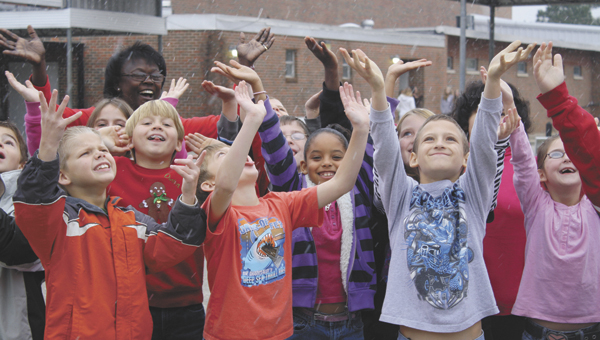 Students in Ms. Freeney’s third grade class at Red Level rushed outside Wednesday to get a taste of the snow. | Courtesy photo

“It’s snowing!” was on the lips of residents throughout Covington County Wednesday.

Light flurries began around 9 a.m. in the northern part of the county, with Red Level Elementary School calling in the first report of snow.

By 9:45 a.m., snowfall became heavy throughout Andalusia and later made an appearance in both Opp and in parts of the south end of the county.

There were only a few pockets of accumulation as flurries soon gave way to sleet. By lunch, the skies had cleared.

While temperatures hovered around 35 degrees throughout the day, it’s a much different picture than what residents will see throughout the rest of the week.

Forecasts are predicting sunny skies and a high of 56 degrees today and low tonight of 28.

Things will heat up again on Friday and Saturday, where we could see a high of 68.

However, things will revert back to winter weather Sunday when the nightly low is forecasted at 19 degrees.

There is a 40 percent chance of rain, which also means the county could once again see snow flurries.