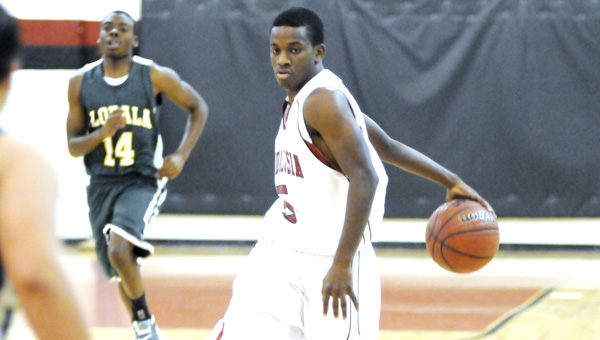 Andalusia’s Quayshaun Denson scored 12 points and helped lead the third-ranked Bulldogs to a 59-37 victory over Florala on Thursday night at the 44th Andalusia Invitational Tournament.

The Wildcats had an impressive second half, outscoring the Bulldogs 11-4 in the third period and 11-6 in the fourth, but Andalusia built a tremendous 49-15 half time lead to have the needed momentum for the win.

“That was a scrappy bunch,” AHS coach Richard Robertson said about Florala. “They’re young, and (FHS) coach (Brad) Garner does a good job of keeping them in the rim of what they can do. “They’re real patient and were working for the shots,” he said. “In their area, they’ve got a chance to do some damage. They try to execute, and that’s what we don’t do all of the time. Execution is what you want. You can’t just run up and down the floor and play.”

Andalusia started out its victory over Florala in the red as the Wildcats took an early 3-2 lead on a three-pointer from John Bess.

The Bulldogs pulled away a few minutes later leading 7-3 on a three from J.D. Dooley.

On a break away by Denson, the Bulldogs led 16-7 late in the first period, and fellow senior Derrick King capped a successful transition with a lay up and was fouled. King missed the shot, but Corinthian “Rint” Sims got the put back to bring Andalusia’s lead to 20-7.

Executing its base pass offense, the Bulldogs scooted out to a 34-12 lead after the first period, and then outscored the Wildcats 15-3 in the second period with the Bulldogs’ B-team playing for the starters.

“Andalusia’s B-team kids, if you put them in the mix with a lot of 1A schools, and let them practice two to three weeks, then they’d be playing a lot,” Garner quipped.

Garner said before the tournament started earlier this week that the only thing his team can do against Andalusia and the caliber of teams at the tournament is get “better.”

“I think we did,” Garner said about getting better. “If we improve and get better and get down in that area tournament time and so forth, and get in the mix, then this game will help us. I think our kids approached the game with a good attitude, and stayed positive.”

Andalusia will play Elba tonight at 8 p.m., and Florala will play Opp at 5.

In earlier action on Thursday night, the Bobcats fell to Elba 44-34, and Enterprise beat Luverne 68-64.