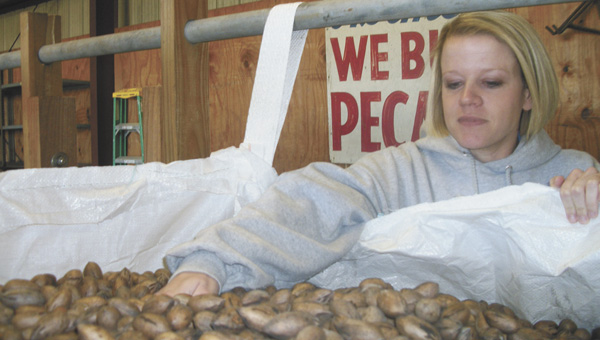 This is the worst pecan shortage in at least 20 years, said Holmes Pecan owner Tony Holmes.

Bakers may have noticed the increased price of the holiday staple at the grocery store and their inability to find a local supplier anywhere.

“I’ve been doing this since 1973, and this is probably the worst season – other than the hurricane years – that I’ve ever seen,” Holmes said.

“We were on track, but this is an off year,” he said. “I’d estimate we’ve lost about 70 percent of the total crop. Best I can figure is that back in April, we had two nights of below freezing temps, plus a hot dry summer. It’s left us with a terrible shortage.”

To illustrate, Holmes described how China has become a major exporter of pecans.

“This year, China put in an order of 102 million pounds of meat,” he said. “When you look at Georgia’s whole crop is 90 million pounds, that means it would take that, all of Alabama’s, Mississippi’s, Louisiana’s and a tenth of Texas’ crop to meet that order.

“We don’t keep a big supply in Andalusia, but it’s enough to make sure the county has pecan pies,” he said. “They’re expensive, but we got them.”

Holmes said price comparisons between now and last year are.

“The bad side is that if you aren’t lucky enough to have your own tree, you have to be able to afford to buy the pecans you need or do without.”