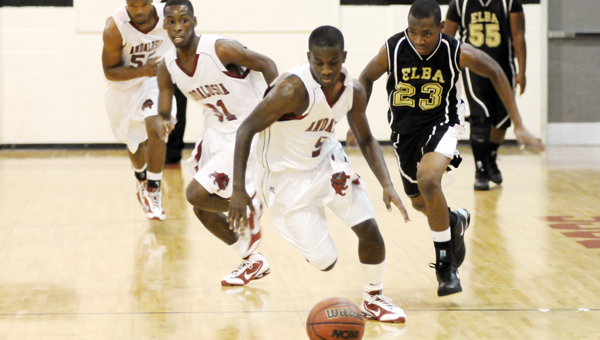 Andalusia coach Richard Robertson said everybody he wanted to play on Friday night got the chance in the third-ranked Bulldogs’ 78-63 win over Elba at the 44th annual Andalusia Invitational Tournament.

“We were far from perfect tonight,” Robertson said. “I’ve been on them at practice for the last two weeks about being lackadaisical. I know how good we are.

Elba took control of the game early in the first period, taking an 11-5 lead with 4:25 on the clock.

Andalusia steadily crawled back, and tied the game up 18-18 at the end of the first period.

Robertson let his starters rest, and sent in the back ups, who matched up with the Tigers’ speed and athleticism on the court.

Elba took a 39-38 lead at half time, and the starters returned in the third period, where the Bulldogs outscored the Tigers 30-10.

Robertson said the key to the third quarter was his team’s “press.”

“We went to a combination press, and took the ball out of certain people’s hands,” he said. “We wore them out, and they got tired and we ran on them. We rebounded on them. That was done with both groups (starters and back ups).

“You’ve got to do it the way I wan it done, and play it hard and smart,” he said. “I love that, and I love competition.”

“My hats off to him,” Robertson said. “He had a good plan for us. He made us shoot the ball outside, and we were fortunate enough we made them. Most of them we made came from off the bench.”

The Bulldogs will play the Enterprise Wildcats tonight at 8 in the championship game. Enterprise beat UMS-Wright 77-71 in overtime in earlier action.

Opp gets 1st win of season