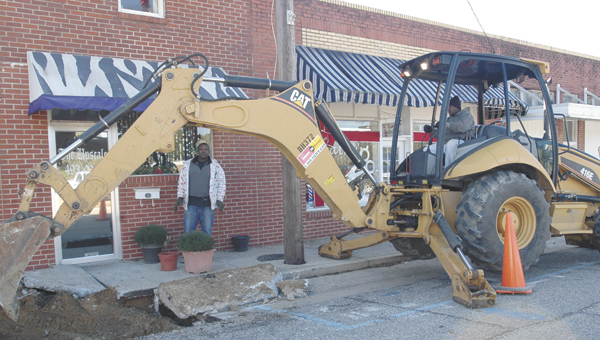 Crews with Northwest Building Supply work on West Covington Avenue in downtown Opp. Mayor H.D. Edgar said the company currently has two crews working, which should cut down on the time. | Kendra Bolling/Star-News

Opp residents should be prepared to take an alternative route around West Covington Avenue.

Construction and demolition began about a week ago on West Covington Avenue.

Edgar reminded residents that while the beautification could cause some “moments of headache,” the improvements are being made to draw people to the city.

“With the bypass coming to Opp, it took a lot of business from our downtown merchants,” he said. “We hope that by making Opp more eye-appealing and putting signs up to draw people off the bypass, it will make people stop and trade with our gas stations, restaurants and other merchants.”

Edgar said there now are two crews working on the project and it won’t take long.

Crews were busy this week tearing up the sidewalks and drainage ditches to prepare to move the utilities underground.

Originally, the West Covington Avenue project was expected to coincide with the Main Street Project, which was completed a few weeks ago, but the all the bids came in too high.

In October, the city awarded the $345,869 bid to Northwest Building Supply.

Funding for the project comes from and Alabama Department of Transportation grant with the city supplying 20 percent of the construction costs.

In addition, Edgar said the city is now applying for grants for the fourth phase of the project, which would revitalize from City Hall to Stewart Avenue.

Edgar said no word on the funding will be announced until 2011.